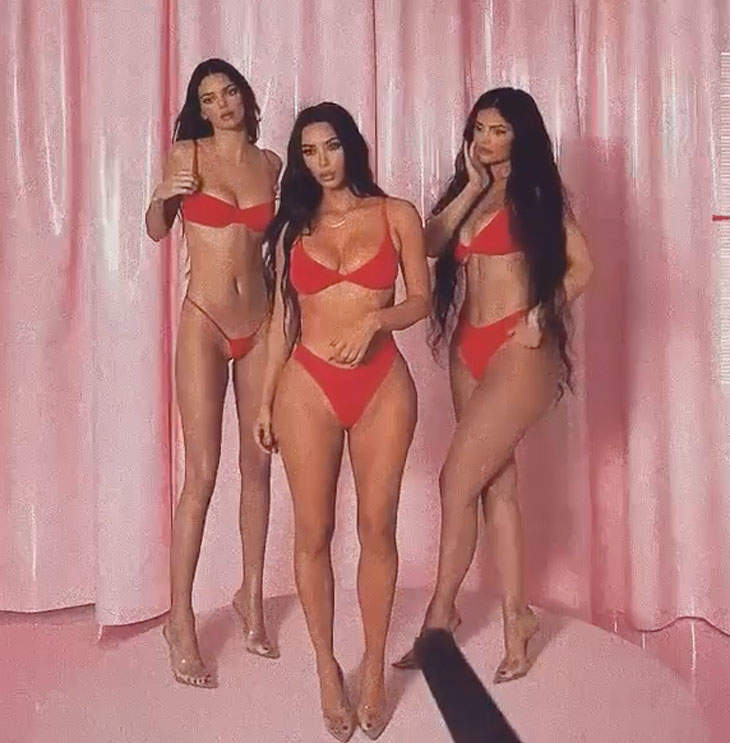 When Kendall Jenner, 25, isn’t faced with the herculean task of reading a teleprompter without botching it up and tongue-tying her speech, she’s fiendishly rendering everyone else speechless with her raw catwalk glamour, shady birthday party during a pandemic, hot mess of a Fyre Festival promotion, and of course her effortless ability to make her sisters and their typically expression-challenged faces seethe with jealousy. Hercules could never!

Sisters Kim Kardashian, 40, and Kylie Jenner, 23, joined Kendall for a Valentine’s-Day-themed photoshoot for Kim’s shapewear line, SKIMS, and the pics, much like everything else coldly unleashed on society by that family, led by their famewhoring ringleader, Pimp Mama Kris, have gone viral.

Kim, 40, was the first to announce her brand’s new launch, sharing photos of the three sisters posing on a pink podium in red lingerie on Instagram. She also included film footage of herself eating whipped cream for the sexy campaign, which drops on Valentine’s Day and was shot in front of a latex pink backdrop.

“Get ready for our hottest drop yet,” the fashion and beauty mogul teased in the caption, tagging photographer Sandy Kim. “This limited-edition capsule of sexy intimates is made from our beloved Fits Everybody material and comes in 2 bold new colors: Poppy and Cherry Blossom. Drops on Valentine’s Day, Sunday February 14 at 9AM PT / 12PM ET exclusively at SKIMS.COM in sizes XXS – 4X.”

The hottest drop of all, of course, was not the pile of photos depicting the sisters as lusty, whipped-cream-eating glambots, nor was it the extremely high-quality assortment of modest and demure lingerie sported by the three. The most sizzling droppage to take place amid all the coquettish, try-hard poses was Kendall’s specious assurance to her fawning fan base that her life isn’t perfect and that they, too, are beautiful:

i am an extremely lucky girl. appreciative of all that i have. but i want you to know i have bad days too and that i hear you! you are beautiful just the way you are!!! it’s not always as perfect as it may seem ❤️ https://t.co/JcdrlR0hF9

This was in response to this thread, with fans lamenting the gloomy state of their own bodies and wishing they could look like her (no one was thinking clearly, as that would of course involve being shot from the wicked, threat-riddled ghoul cave that is the loin region of Pimp Mama Kris).

But well, Kendall hasn’t responded to some saying that she looks like that thanks to one of the Kardashians’ favorite beauty tools: Photoshop!

Kendall Jenner is being called out for promoting unrealistic body standards with photoshopped photos of her body. pic.twitter.com/V0BTKs4JFa

Kendall also got love from her photoshoot mates. People again:

The Keeping Up with the Kardashians star also posted videos to her Instagram Story of herself getting her makeup done before the shoot as Kendall, 25, can be seen posing in the background. “Look at that perfect human being. Like what? How can I do a shoot with her?” Kim said of her supermodel sister. “Remind me to never do a photo shoot in lingerie with Kendall.”

“It’s insane how perfect she is,” Kim added.

“perf 😍” Kylie, 23, wrote in the comment section. “KENDALL ELISABETH!! 🙌🏽 wow,” the model’s longtime hairstylist Jen Atkin added, joking, “I wonder if anyone’s looking at how shiny the back of my hair looks.”

It was nice of Kim to take a break from manufacturing tension around her divorce proceedings from Kanye West to strip what little she must have been wearing to supply her usual, vacant-eyed stare and overly exposed bits to the photoshoot. Kylie, of course, also took time out of her busy day being a billionaire makeup mogul and archenemy of PETA by continuing to wear fur, to appear on the set and look stiff and uncomfortable in her own skin while posing with her sisters. And yeah, yeah, “her own skin” makes me shake my head, too.

Here is the shoot, with more sexiness than any of us can handle in 30 seconds. But remember, as you sloth around on the couch and reach for another row of Double-Stuf Oreos, that we are all beautiful:

Tags: Kendall Jenner, Kim Kardashian, Kylie Jenner, Photoshop Awards, Sibling Rivalry, The Sisters Grim
SHARE
Our commenting rules: Don't be racist or bigoted, or post comments like "Who cares?", or have multiple accounts, or repost a comment that was deleted by a mod, or post NSFW pics/videos/GIFs, or go off topic when not in an Open Post, or post paparazzi/event/red carpet pics from photo agencies due to copyright infringement issues. Also, promoting adblockers, your website, or your forum is not allowed. Breaking a rule may result in your Disqus account getting permanently or temporarily banned. New commenters must go through a period of pre-moderation. And some posts may be pre-moderated so it could take a minute for your comment to appear if it's approved. If you have a question or an issue with comments, email: [email protected]
src="https://c.statcounter.com/922697/0/f674ac4a/1/"
alt="drupal analytics" >