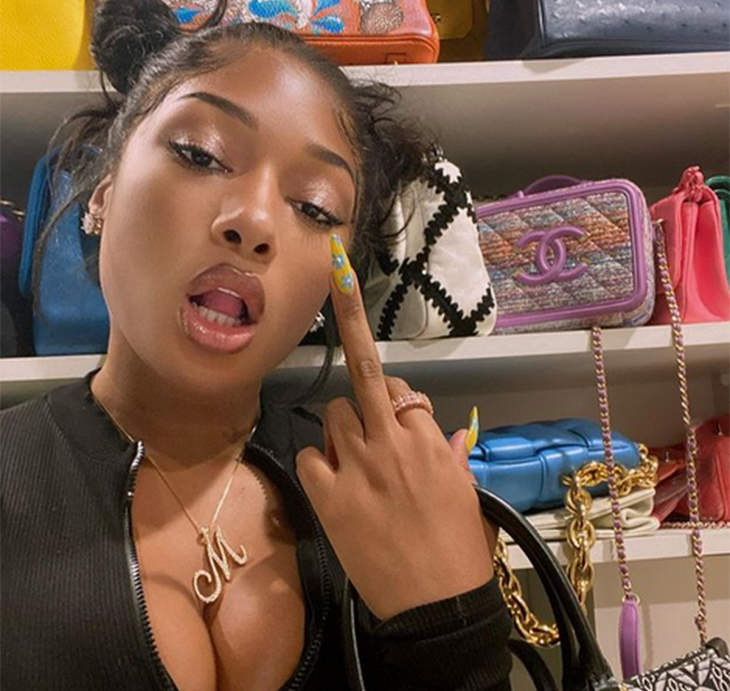 Last summer, after Megan Thee Stallion was shot in the feet following a party in L.A., she confirmed it was Tory Lanez who attacked her. He denied the allegations but unfortunately for him there was enough evidence to charge him with felony assault–to which he pleaded not guilty. Tory then released an album in which he once again turned himself into the victim and denied he is the one who shot Megan. And then Tory went off in an unhinged video where he again denied shooting her but provided no other viable explanations.

Megan called him “crazy” and released some pointed music of her own in response because two can record a diss track. And now apparently a rumor has circulated that charges were dropped and Megan had to once again defend herself from some pretty blatant bullshit.

After the shooting in July 2020, Tory was initially charged with possession of a concealed weapon and then later hit with felony counts of assault with a semiautomatic firearm, personal use of a firearm, and carrying a loaded unregistered firearm in a vehicle. Tory has denied all of it without telling us who shot Megan if he didn’t. And HuffPo says that earlier this week, some tweets and reports came out saying that charges against Tory had been dropped for whatever reason. Megan once again had to come to her own defense and call out the “fake news” and people who claim to believe Black women but somehow have found Tory’s non-explanation with zero evidence convincing. She also hints that it’s Tory’s own team who are setting up the fake stories.

Y’all can’t tell when shit fake news? Y’all still don’t see an ABUSER picking with me ? The first court date got pushed back bc of the inauguration but I can’t wait until the MF FACTS come out ! Bitch you shot me AND MY STORY NOT CHANGING AND BITCH YOU GOING TO JAIL

AT THIS POINT IM GETTING ANNOYED ! STOP BELIEVING EVERYTHING YOU READ ON THE MF INTERNET. Imagine how I feel waking every day seeing people LIE and turn my trauma into a joke ? That whole team figures out ways to create doubt with my story every week and the media eats it up

Trauma is real I’m still traumatized from loosing my mom dad and one of my grandmothers and on top of that being shot. I’m not open abt anything on the internet usually bc I like to keep my emotions private but I’m reaching my limit, Im going to keep staying positive.

Team Tory also shut down the claim and said that a court date has been set for next month:

a rep for Tory Lanez says it is NOT TRUE that charges against him in the Megan Thee Stallion shooting were dropped: “The blog that posted this info is wrong. I assume the docket hasn't been updated … The next hearing date is in mid-February.”

I notice they didn’t comment on Megan’s claim they planted the story. I also love that Megan said, “At this point I’m getting annoyed.” Like she was shot, but now she’s annoyed? That’s fortitude. But I get it, I mean she said he texted her to apologize for shooting her, which is pretty solid evidence. And that he tried allegedly to buy her off. I see how constantly being questioned could get tiring. But I have faith in Megan, I’ve seen how long she can twerk while crouching. Anyone with that kind of leg and core strength can withstand anything.