Matt Damon Has Been Seen Without His Wedding Ring On 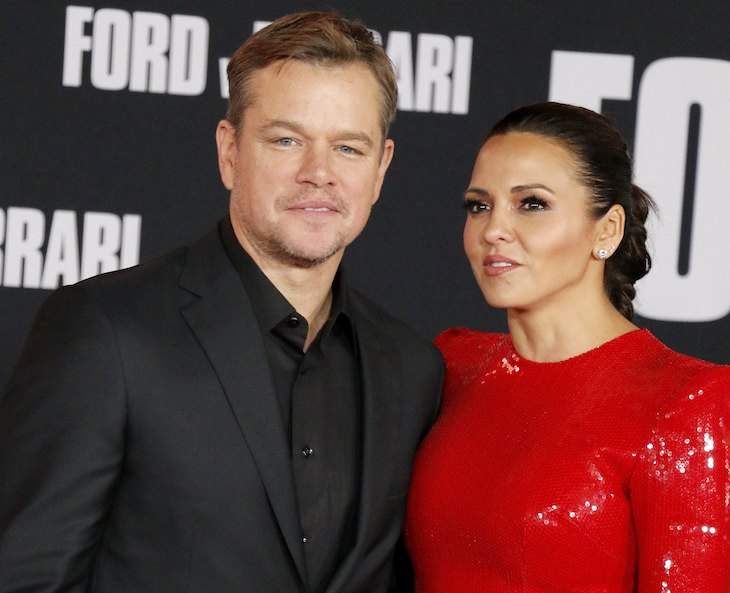 The job of a celebrity publicist is to let the public know if there is anything new information about said celebrity that might be relevant to the public’s interest. For example, are they pregnant? Did they debut a new hair cut? Was that canoodling not what it looked like? But sometimes a publicist doesn’t really have to do any work at all, because their client will go ahead and drop hints or break news, whether it be intentional or by accident. I’m not saying Matt Damon had any such intentions this weekend. All I will say is, a whole bunch of people have noticed that Matt was photographed without his wedding ring on for the second time in a week.

Matt has been married to Luciana Barroso since 2005, and they have four daughters together. Matt is also very best friends with Ben Affleck, who he has been hanging out with lately in Los Angeles. Here’s Matt last week, visiting Ben, no wedding band to be seen.

And here’s Matt on Sunday, again at Ben’s house, and again without his ring:

There’s also a rumor that Ben Affleck and Ana de Armas broke up so maybe Matt comes over so he and Ben can look at their Raya match-ups together.

Lainey Gossip has pointed out the missing ring each time it has failed to accompany Matt to Ben’s house. But, as Lainey also points out, there are many reasons why Matt might not be wearing his ring. Like the fact that we’re all washing our hands 2.8 million times a day, and sometimes rings can get in the way of such self-sanitization. His fingers might have been too bloated. Or maybe he just didn’t want to wear it! The vows aren’t, “With this ring, I thee wed, and thy will never take it off EVER no matter what, or may the flames of unfaithfulness to my wife swallow me into Divorced Hell. But of course, people who live for gossip will assume his lack-of-ring is a sign that something might be up.

Personally, here’s my theory on Matt’s missing wedding ring. He takes off his ring when he visits with Ben Affleck, every time. Because there’s always a chance that his ring might come loose, and fall into a Dunkin’ cup. I’m sure Ben’s got at least a dozen half-drank iced coffees around his house at any given time. And it would be no good if he took a swig from the closest cup, and mistook a ring for an ice cube.

Tags: Ben Affleck, Matt Damon, Suspicious Shit
SHARE
Our commenting rules: Don't be racist or bigoted, or post comments like "Who cares?", or have multiple accounts, or repost a comment that was deleted by a mod, or post NSFW pics/videos/GIFs, or go off topic when not in an Open Post, or post paparazzi/event/red carpet pics from photo agencies due to copyright infringement issues. Also, promoting adblockers, your website, or your forum is not allowed. Breaking a rule may result in your Disqus account getting permanently or temporarily banned. New commenters must go through a period of pre-moderation. And some posts may be pre-moderated so it could take a minute for your comment to appear if it's approved. If you have a question or an issue with comments, email: [email protected]
src="https://c.statcounter.com/922697/0/f674ac4a/1/"
alt="drupal analytics" >