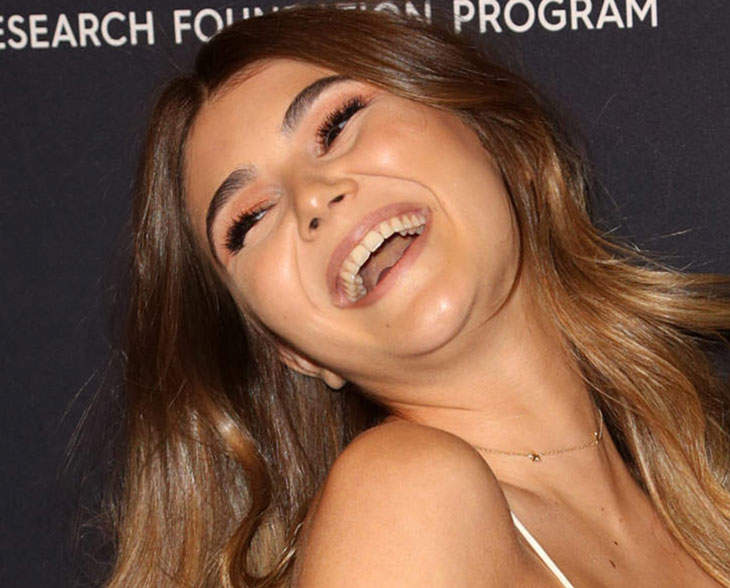 21-year-old Olivia Jade is up to her old tricks again. No, not faking some rowing pictures to get into college. I’m talking about YouTube! The daughter of convicted felons, 56-year-old Lori Loughlin and 57-year-old Mossimo Giannulli, asked her TikTok fans whether or not she should return to YouTube and guess what happened? They said yes! Yay! Maybe she’ll actually say something this time?!

After months of trying to act like they did nothing wrong, Lori and Mossimo finally took a plea deal and pled guilty to fraud charges for paying $500,000 to get their daughters into USC. Lori was sentenced to two months and Mossimo got five months. Mossimo is currently in prison and will get out in April. But Lori is now out of prison and a source tells Us Weekly that there was a “definite heaviness” in the air when she reunited with her daughters, and no, the heaviness wasn’t from Lori letting out a huge fart from eating all that prison chow.

“Lori had a very emotional reunion with her daughters this morning at the family home.”

And after that reunion, Olivia took to TikTok to ask her followers if she should make a YouTube comeback, posting a video on Tuesday captioned:

“Like this if I should bring back my #vlogzzzzz. Also tried to show u guys this natural makeup look (I can do a tutorial if anyone wants) Kk bye ily.”

I’m sure that was a totally real question and not just a part of her getting people hyped to again watch her apply basic-levels of lip-gloss and mascara on her YouTube channel. But she’s pretending it’s because of the “fans” that she’s coming back:

“Ah!” is right. If her “#vlogzzzzz” aren’t all about her white privilege and the racist practices she’s fighting against in the influencer community, I think this proves Adrienne Banfield-Jones correct in her assessment that Olivia only went on Red Table Talk to clean up her image and doesn’t really give a shit about taking responsibility. Olivia’s dad isn’t even out of prison yet and she’s already preparing to return to YouTube to film videos of her going through the latest Lauren Conrad Beauty PR package. No, thanks. I already know they’re faulty bullshit!

Tags: Lori Loughlin, Mossimo, Mossimo Giannulli, Olivia Jade
SHARE
Our commenting rules: Don't be racist or bigoted, or post comments like "Who cares?", or have multiple accounts, or repost a comment that was deleted by a mod, or post NSFW pics/videos/GIFs, or go off topic when not in an Open Post, or post paparazzi/event/red carpet pics from photo agencies due to copyright infringement issues. Also, promoting adblockers, your website, or your forum is not allowed. Breaking a rule may result in your Disqus account getting permanently or temporarily banned. New commenters must go through a period of pre-moderation. And some posts may be pre-moderated so it could take a minute for your comment to appear if it's approved. If you have a question or an issue with comments, email: [email protected]
src="https://c.statcounter.com/922697/0/f674ac4a/1/"
alt="drupal analytics" >