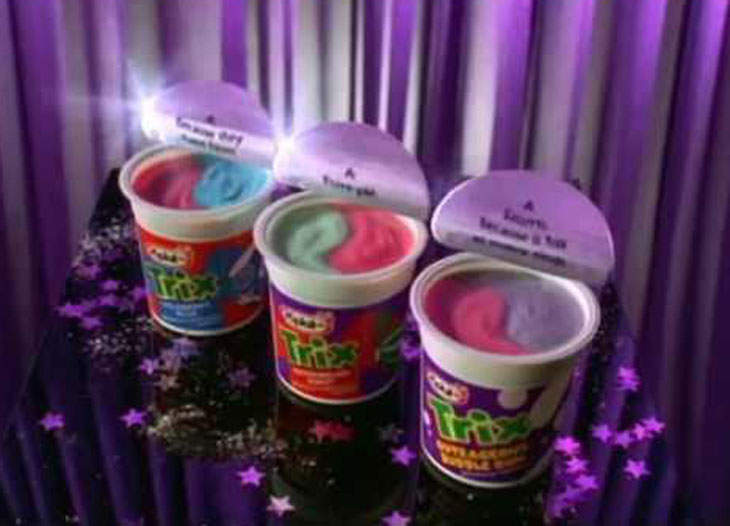 Sometime in the early-aughts, Yoplait and Trix joined forces to give us the cavities-inducing union of Yoplait yogurt and Trix cereal. But Trix Yogurt wasn’t just Trix-flavored yogurt. It was swirly to give you two flavors in one cup. Two Flavors, One Cup sounds like the G-rated version of Two Girls, One Cup. But truly, the Trix Rabbit showed he could easily win Top Chef with this culinary masterpiece.

Yoplait’s Trix Yogurt came in several flavors like Strawberry Banana Bash, Wildberry Red Swirl, Watermelon Burst, Wildberry Red Swirl, and Cotton Candy, which was everybody’s favorite because it was basically just extra thick candy slobber. Above is the Photoshopped Trix Yogurt and below is the real thing. So basically, the above picture is me in my Grindr pic and the picture below is what shows up at a trick’s door: And here’s a Trix Yogurt commercial from 2009 that lets you know that the not-so-secret ingredient in Trix Yogurt was obviously LSD:

Yoplait’s Trix Yogurt was discontinued in 2013, and Yoplait currently sells a knock-off version of it, but it’s just not the same. With the Trix name on it, you just knew it was going to be 99% sugar and 1% yogurt which equals 100% deliciousness. And the swirl also pointed out who wasn’t a sociopath and who was. Because non-sociopaths mixed both flavors into one and sociopaths meticulously ate each flavor separately. And yes, I ate each other separately.