Matthew Morrison’s Grinch Was Deemed Too Sexy For Prime Time 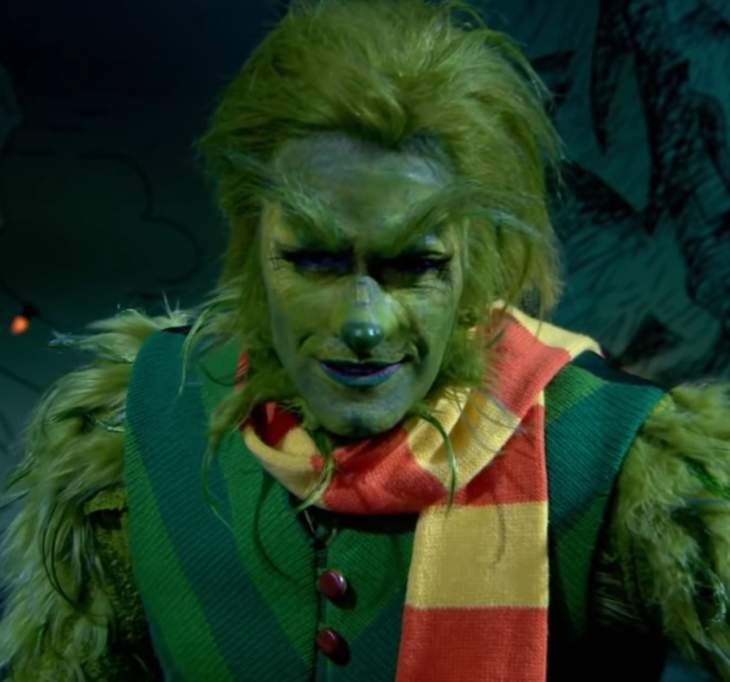 Well, it seems as though the horrifying sneak preview we got of Matthew Morrison as The Grinch did little to prepare people for the sexually-charged depravity that was to come. Yahoo! reports that many of those who tuned in to watch Matthew’s performance in Dr. Seuss’ The Grinch Musical!, which aired last night on NBC, were left feeling “physically uncomfortable” and in need of a therapy session. Apparently, Matthew’s Grinch was a touch too crotch-forward for most people’s taste.

The show, which was broadcast from the Troubadour Theater in London, co-starred Denis O’Hare as the Grinch’s dog Max and Booboo Stewart as a young Max, but it looks like Matthew was the one doing all the panting and leg-humping. Yahoo reports:

While Morrison’s Grinch was unique, many viewers complained on social media that it was also too sexual. Morrison did quite a bit of heavy breathing, moaning, and fourth-wall-breaking. Plus there was the occasional hip-thrust during his performance.

A pelvic-thrusting, bad-punning, screeching version of the green curmudgeon was not what anyone wanted or needed in 2020. Morrison did his level best – he’s a good performer, but the part simply never should have been written.

Despite a fierce competition, the worst part of “Grinch” is the creature himself. This interpretation of the character feels off from the start, the costuming and makeup choices are strange and off-putting (especially a deep V-neck on his Santa jacket). Morrison’s Grinch vacillates between a flamboyance and attempts at evil too sinister for a children’s story. Morrison is also uncomfortably physical in the role, employing the aforementioned pelvic thrusting and some oddly sexualized dancing.

I made a Twitter account for this. I needed to know im not the only one who feels physically uncomfortable with what’s happening. It’s a no for me! #GrinchMusical pic.twitter.com/I1LhPa1pwS

Still, some people were clearly delighted by the performance. OK, one person was.

Definitely one of a kind. Don't you agree? #GrinchMusical pic.twitter.com/JRqHOTzBvH

In an interview with Entertainment Weekly, Matthew shared that his Grinch performance was inspired in part by Joaquin Phoenix‘s Joker, in particular the eyes-wide shut noodle dancing he does on that staircase. Which explains a lot.  Matthew told EW:

“I took a lot from Joaquin Phoenix’s performance in Joker, just going down those steps, like loose and [reveling in] abandon and just carefree and raw. I really felt like that was how the Grinch would dance. At first, I was like ‘I don’t think the Grinch dances’; it didn’t feel very Grinch-y, but then I came up with that and it felt right.”

Gunning for that Emmy nomination I see. And to all the haters, Matthew has a message. You can kiss his fat, green, unnecessarily hairy, strangely bulbous, and definitely DTF ass.

Tags: Grinches, Kill It With Fire, Matthew Morrison
SHARE
Our commenting rules: Don't be racist or bigoted, or post comments like "Who cares?", or have multiple accounts, or repost a comment that was deleted by a mod, or post NSFW pics/videos/GIFs, or go off topic when not in an Open Post, or post paparazzi/event/red carpet pics from photo agencies due to copyright infringement issues. Also, promoting adblockers, your website, or your forum is not allowed. Breaking a rule may result in your Disqus account getting permanently or temporarily banned. New commenters must go through a period of pre-moderation. And some posts may be pre-moderated so it could take a minute for your comment to appear if it's approved. If you have a question or an issue with comments, email: [email protected]
src="https://c.statcounter.com/922697/0/f674ac4a/1/"
alt="drupal analytics" >