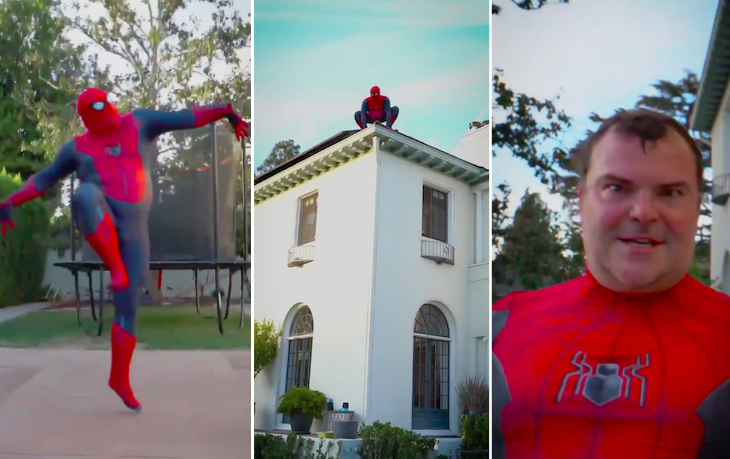 At the end of the video, Jack takes his mask off and announces, “Now let’s do some gaming!” I guess both dance vids were promo for Jack’s YouTube channel, Jablinski Games, where’s he’s covering the new PS5 game, Spider-Man: Miles Morales:

Jack is also working with Tony Hawk and Steve-O and selling signed photos to try to raise money for getting skate parks built in underserved communities in the U.S. Merch sales will also go towards the charity Doctors Without Borders. And here I thought Jack was just doing it for the attention. For shame, me!

Tags: Charity, Dancing Machine, Jack Black, Open Post, Spider-Man
SHARE
Our commenting rules: Don't be racist or bigoted, or post comments like "Who cares?", or have multiple accounts, or repost a comment that was deleted by a mod, or post NSFW pics/videos/GIFs, or go off topic when not in an Open Post, or post paparazzi/event/red carpet pics from photo agencies due to copyright infringement issues. Also, promoting adblockers, your website, or your forum is not allowed. Breaking a rule may result in your Disqus account getting permanently or temporarily banned. New commenters must go through a period of pre-moderation. And some posts may be pre-moderated so it could take a minute for your comment to appear if it's approved. If you have a question or an issue with comments, email: [email protected]
src="https://c.statcounter.com/922697/0/f674ac4a/1/"
alt="drupal analytics" >