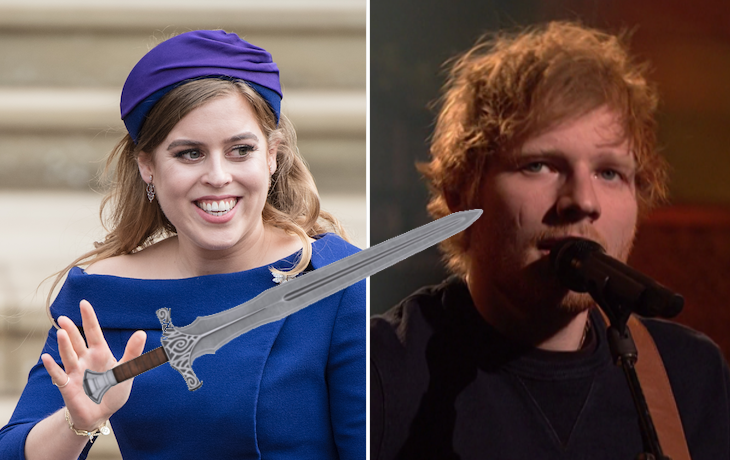 A few years ago, Ed Sheeran, the man who cursed us with the 2017-ruining song “Shape of You”, allegedly got sliced in the face by a drunken, sword-wielding Princess Beatrice. He never confirmed the story, and, at one point, 2004’s James Blunt suggested it was just a joke. But, in a new interview with the Telegraph, Ed’s longtime manager, Stuart Camp, is finally talking about the incident, calling Princess Beatrice a “fucking idiot”.

The story goes that the princess, Ed, and James Blunt were all getting blotto at the Royal Lodge of Windsor, the home of Beatrice’s trash father, Prince Andrew. James Blunt joked that he wanted to get knighted, and Beatrice grabbed a sword from the wall, not realizing Ed was standing nearby. As she said the words, “arise, Sir James”, she swung the sword back and accidentally struck Ed’s face. Beatrice was allegedly “inconsolable” after the incident. Ed was immediately taken to the hospital, where he got stitches, and had a facial scar for some time after (see the above picture from a few months later).

Then things got shady. According to manager Stuart, the royals shockingly wanted to sweep the swordplay under the rug, via HuffPo:

“I got quite protective over that,” Camp said, explaining that he received a call from the palace afterward and hadn’t told the story before. “Because we’ve never publicly commented on it. But certain people said, ‘Oh, you should lie and say it wasn’t her and say it was someone else.’”

“I said, well, we’re not telling anyone anything. I’m not lying, just because someone’s a fucking idiot,” he added. “Because they’re thinking, yeah, I will get paralytic and take a sword off the wall. You’re just asking for trouble. You know, we’ve not heard hide nor hair from her since.”

Buckingham Palace told HuffPo they have “no comment” on the story. But give them some warning, next time, and they can figure out a way to blame it all on Meghan Markle!

So, an unsuspecting Ed Sheeran getting sliced in the face is indisputably terrible, yes. Especially how it was handled after the fact. Beatrice totally should have reached out to poor Ed with apologies, flowers, and the Crown Jewels. And yet…ya can’t fault a gal for drunkenly taking a stab (heh) at some prop comedy in a room full of boys. Princess Carrot Top over here!

Tags: Ed Sheeran, James Blunt, Princess Beatrice, Swords
SHARE
Our commenting rules: Don't be racist or bigoted, or post comments like "Who cares?", or have multiple accounts, or repost a comment that was deleted by a mod, or post NSFW pics/videos/GIFs, or go off topic when not in an Open Post, or post paparazzi/event/red carpet pics from photo agencies due to copyright infringement issues. Also, promoting adblockers, your website, or your forum is not allowed. Breaking a rule may result in your Disqus account getting permanently or temporarily banned. New commenters must go through a period of pre-moderation. And some posts may be pre-moderated so it could take a minute for your comment to appear if it's approved. If you have a question or an issue with comments, email: [email protected]
src="https://c.statcounter.com/922697/0/f674ac4a/1/"
alt="drupal analytics" >