Open Post: Hosted By The “Hilary” Tattoo That Hilary Duff’s Husband Got On His Ass 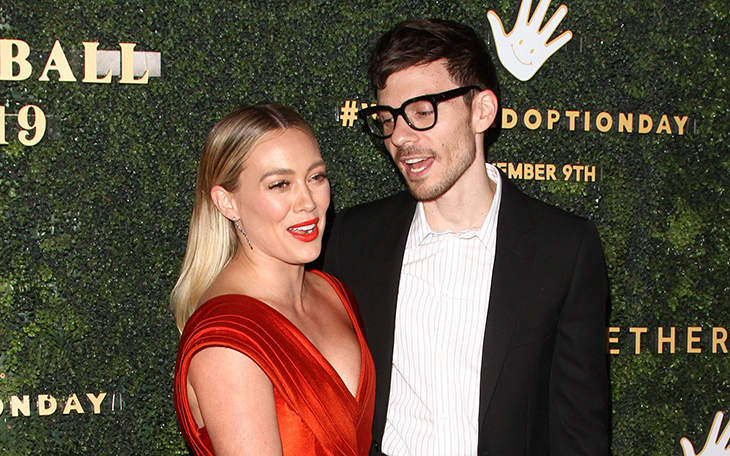 Hilary Duff and Matthew Koma got married last year after she gave birth to their first child (her second) in 2018. It’s also Hilary’s second marriage after her first to Canadian rich-kid/hockey player Mike Comrie ended after three years. She and Matthew have dated since like 2015-ish and it looks like they’ve made things 100% official now. I’m not talking about the marriage, this is a step beyond that–anyone can get out of a marriage (well not Brangelina…) but do you know how painful it is to laser off an ass tattoo? Here’s hoping Matthew and Hilary stay together or his next girlfriend is also named Hilary, because his ass has literally and officially been branded with a tattoo of her name. Hilary owns his ass now!

Matthew posted the picture of his new tattoo to Instagram and said he got it after losing a bet to Hilary:

Good luck winning a fight with your wife when her name’s tattooed on your butt cheek. #squats #gainz #laseraway

This tracks since Hilary Duff is the kind of badass mofo to fight back against those Hollywood-child-trafficking-conspiracy lunatics and tells arrogant young people to fuck themselves. So I imagine she also runs her household with an iron fist. I hope that Hilary does the same and gets a name tattooed on her ass. But I don’t want it to be Matthew’s–I want her to get the name “Lizzie” on her ass in the same font because of Lizzie McGuire. Her gritty adult reboot may never get to live out on television but Hilary can honor her in spirit.

Tags: Ass, Hilary Duff, Matthew Koma, Open Post
SHARE
Our commenting rules: Don't be racist or bigoted, or post comments like "Who cares?", or have multiple accounts, or repost a comment that was deleted by a mod, or post NSFW pics/videos/GIFs, or go off topic when not in an Open Post, or post paparazzi/event/red carpet pics from photo agencies due to copyright infringement issues. Also, promoting adblockers, your website, or your forum is not allowed. Breaking a rule may result in your Disqus account getting permanently or temporarily banned. New commenters must go through a period of pre-moderation. And some posts may be pre-moderated so it could take a minute for your comment to appear if it's approved. If you have a question or an issue with comments, email: [email protected]
src="https://c.statcounter.com/922697/0/f674ac4a/1/"
alt="drupal analytics" >