Miley Cyrus Was On Joe Rogan’s Podcast And Talked About Her Divorce, And Also Hit At Joe About “RuPaul’s Drag Race” 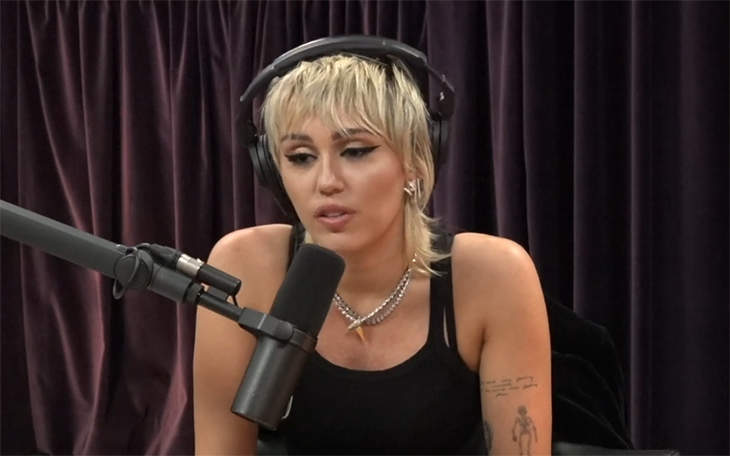 Miley Cyrus appeared on Joe Rogan‘s podcast, The Joe Rogan Experience, and talked about her life, and divorce, and music, and a head injury she got as a baby, and most excitedly of all, RuPaul’s Drag Race. Miley became the Defender of Drag Race and defended its honor when Joe accused drag queens of all having the “same move” when talking about a death drop (proper name: a Dip). Miley took no shit and flamed Joe on his own program. She will not tolerate slander of the drag commune-ti-ty, honey! Even with a head injury, she’s smarter than that!

Miley said that her divorce from Liam Hemsworth “really fucking sucked.” And it wasn’t because of the sad break-up, which she could handle, but because after she immediately jumped to Kaitlynn Carter’s crotch, she was accused of cheating, and Liam was accused of being a partying mess. via People:

“What really sucked about it wasn’t the fact that me and someone that I loved realized that we don’t love each other the way that we used to anymore. That’s okay, I can accept that. I can’t accept the villainizing and just all those stories.”

Miley also admitted that she’s jumped from crotch to crotch since 2015:

Miley said she's never been single for the last 5 years and that she was really excited for the VMA's performance because it was the first time that she will be on stage as a single "Bad ass, grown, envolved, secure, Woman." pic.twitter.com/jURmaOKQAc

Miley then regaled us with a story of when her dad Billy Ray Cyrus took her two-year-old ass on a dirt bike in a baby backpack. While he was riding, he dodged a fallen tree but baby Miley slammed into it head-first. (via Vulture)

It’s bad. My dad had me–this is really bad, but he can’t go to jail, I don’t think, because it’s a long enough time away. He had me in a baby backpack and I was on a dirt bike with my dad. And he was riding, and a tree had fallen, and he ducked, I didn’t, and I hit my head on the tree. It was bad. So that’s what’s wrong. Everyone’s asked me that for years.

Miley and her doctor agree that the head injury probably had lasting impacts:

“Maybe it knocked me into this identity, or something. He knows that there’s something to that. Dr. Amen, we’ve talked about that a lot. So when I get really overwhelmed… I also have a tendency, when I know something’s really stupid, I just gotta try it, to know that it’s stupid, which makes it stupid, ‘cause I already knew about it. Sometimes I’m like, is it better to know it’s dumb and do it? Or not know it’s dumb and do it? That’s the head injury.”

As for Drag Race, Miley got Joe to watch some clips of drag queens death-dropping, which must have confused Joe because he said they all were doing the “same move” and wasn’t impressed. So Miley slapped back by saying, “That’s what I think when I’m watching your show too–all the same stuff.”

Joe Rogan was NOT ready for that 😭 pic.twitter.com/DdBr3gvySM

How dare Joe Rogan! Joe Rogan once spoke to Alex Jones for close to five hours and he’s written about how he shits himself because of his all-meat diet, so he should be more impressed by these drag queens. If Joe did a death drop, he would literally shit himself, so clearly it is a skill.

Tags: Joe Rogan
SHARE
Our commenting rules: Don't be racist or bigoted, or post comments like "Who cares?", or have multiple accounts, or repost a comment that was deleted by a mod, or post NSFW pics/videos/GIFs, or go off topic when not in an Open Post, or post paparazzi/event/red carpet pics from photo agencies due to copyright infringement issues. Also, promoting adblockers, your website, or your forum is not allowed. Breaking a rule may result in your Disqus account getting permanently or temporarily banned. New commenters must go through a period of pre-moderation. And some posts may be pre-moderated so it could take a minute for your comment to appear if it's approved. If you have a question or an issue with comments, email: [email protected]
src="https://c.statcounter.com/922697/0/f674ac4a/1/"
alt="drupal analytics" >