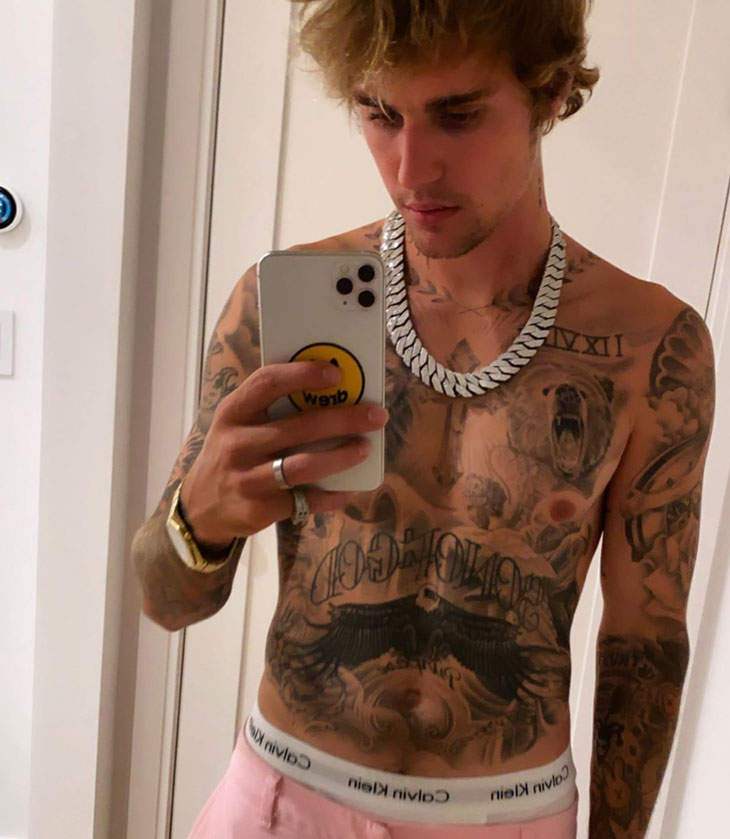 Justin Bieber got into a pissing match with a doctor last week, because I guess he’s trying to be the badass toddler version of GOOP (POOP!). Dr. Joshua Wolrich dragged Justin for suggesting that food can affect your mental state, including anxiety or depression. Justin slapped back at the doctor for delivering educated medical advice backed with research but ultimately caved to reason and tweaked his initial statement about diet. But The Biebs did tell the doctor to fuck off. No lolly for that whiny brat!

It all started with 26-year-old Justin telling his over 145 million followers on Instagram that instructing his private chef to switch up his diet worked for his anxiety and depression, so it can work for them too. via BuzzFeed:

“If you are feeling anxious or depressed a lot of it has to do with our diet! Try changing up your diet! It has helped me so much!!!”

People were quick to tell Justin to eat a spoonful of STFU:

“Just ate an apple now my depression is cured, thanks Justin!”

“People without medical degrees should not be giving medical advice.”

Dr. Joshua is both a surgical doctor and also the host of a podcast called Cut Through Nutrition which is all about the health benefits of food. Dr. Joshua told Justin he’s 100% incorrect and needed to settle down.

“Food is many, many things but it’s not medicine… That’s not to say it isn’t important–it provides us with nutrition and energy to thrive, but it has its limitations. Anxiety and depression [are] very rarely a result of food intake. Mental health is complex and boiling [it] down to the privilege of food choices is incorrect and stigmatising for those who struggle with it on a daily basis…

For any of you who read this and felt a sense of guilt that if only you changed your food you wouldn’t struggle with mental health… please know that’s not accurate. You are doing a fantastic job–do not compare yourself to a celebrity with all the capacity for change and privilege in the world x.” Dr. Joshua kept on, kept on and hit Justin with some more science:

“Food can’t cure cancer, and people that go on juicing diets to try and cure their leukaemia die. We know that. When you say “food is medicine” you’re also propagating that. Food is food. Medicine is medicine. We need to respect both but not conflate the two. Let’s find better ways of expressing just how important food can be.”

I reminder as to why I believe that the phrase ‘food is medicine’ can be harmful. Food is food. Medicine is medicine. We need to respect both but not conflate the two. ⠀⠀⠀⠀⠀⠀⠀⠀⠀ Let’s find better ways of expressing just how important food can be. ⠀⠀⠀⠀⠀⠀⠀⠀⠀ N.B. this phrase is perfectly acceptable in the context of eating disorder recovery and can be a helpful mindset to have during treatment. This post is not to negate that.

According to Insider, Justin and Dr. Joshua spoke privately and it led to Justin slightly changing his post, though Dr. Joshua still called it “movement in the right direction.” If you are feeling anxious or depressed it can often have a lot to do with our diet! Try changing up your diet! It has helped me so much !!!

Tags: Bad Medicine, Justin Bieber
SHARE
Our commenting rules: Don't be racist or bigoted, or post comments like "Who cares?", or have multiple accounts, or repost a comment that was deleted by a mod, or post NSFW pics/videos/GIFs, or go off topic when not in an Open Post, or post paparazzi/event/red carpet pics from photo agencies due to copyright infringement issues. Also, promoting adblockers, your website, or your forum is not allowed. Breaking a rule may result in your Disqus account getting permanently or temporarily banned. New commenters must go through a period of pre-moderation. And some posts may be pre-moderated so it could take a minute for your comment to appear if it's approved. If you have a question or an issue with comments, email: [email protected]
src="https://c.statcounter.com/922697/0/f674ac4a/1/"
alt="drupal analytics" >