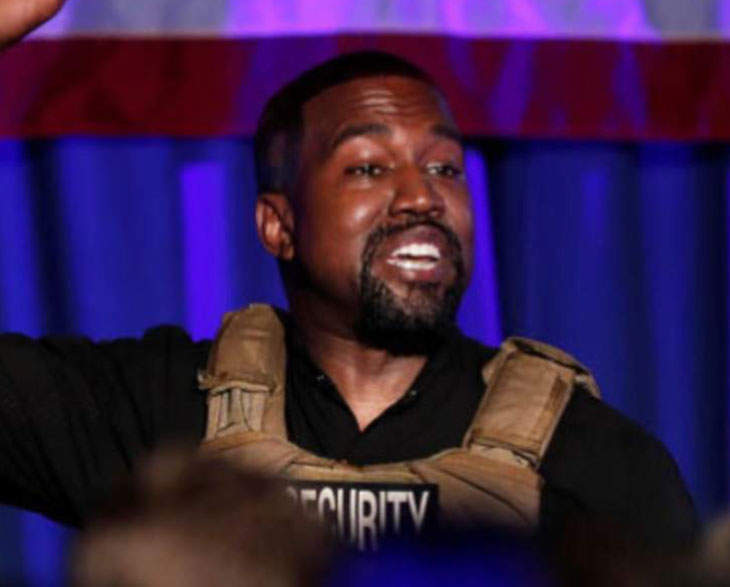 I’m afraid Kanye West may have gone full Norma Desmond only instead of wearing a turban from the Nick Cannon Collection Pour L’Hommies he wore a bulletproof vest, and it’s his last shred of dignity that’s floating belly up a swimming pool. Yesterday, thousands of Americans who have enough going on as it is, looked on in horror as Kanye held his first campaign rally in Charleston, South Carolina. He should have consulted with his wife Kim Kardashian West about which soft-focus filter to use because while Kanye may have been ready for his close up, the rest of us will never be.

Under normal circumstances (I know, haha, what are those?) the state of a person’s mental health is the business of that individual, their family, and their mental healthcare provider. But when a person decides to run for public office, part of the deal is we the people get to scrutinize their ability to make sane and rational decisions that benefit the greater good. If we ascertain that they cannot, we elect them President of The United States. As of 2016, this is all just part of the process! In that respect, Kanye is doing very well. Sadly, that is the only respect in which Kanye seems to be doing well.

On Sunday, the 43-year-old rapper appeared in front of a small crowd of fans at the Exquis Event Center, wearing a bulletproof vest and “2020” shaved into his hairline. During his rambling speech, which lasted for over an hour, West made bizarre and controversial comments, including: “Harriet Tubman never actually freed the slaves, she just had them work for other white people.”

Yes, instead of taking his aim at his presidential rivals, Kanye decided to take aim at a universally revered American hero, a Black woman no less, who’s been dead for over 100 years. If you loved Kanye’s hit Slavery Was A Choice, you’re really going to dig the B-side Harriet Tubman Ain’t Shit. Kanye, take it away.

They been sayin man Trey need to call these niggas before he just put em online blastin. Ye you in the way of progress foreal, how you turn this goofy from who you were? I’m so confused, whoever got his number need to call him.

Believe it or not, this one of Kanye’s more lucid moments during the rally. Although, can you call a handful of people laughing nervously a rally? I once went to an art thing in a warehouse that looked like this and the artist, in all sincerity and seriousness, reenacted her own birth using a strobe light and crawled out of one of those fabric tubes they use for dogs doing agility classes. Anyway, speaking of birth-trauma…

In one instance during the event, which also turned into a Q&A session with attendees, West expressed his thoughts on Planned Parenthood and abortion, and broke down in tears after revealing very personal experiences involving his late mother Donda West and his wife Kim Kardashian West, who gave birth to daughter North in 2013 before the couple wed in 2014.

“Even if my wife wants to divorce me after this speech she brought North into the world even when I didn’t want to. She stood up and she protected that child. You know who else protected a child? 43 years ago, who do you think protected a child?” West said at the rally as he began to sob uncontrollably.

I will spare you the video of that teary-eyed rant. It’s upsetting and made me feel ookie inside, but here’s a link. But here’s a funny beat where he was talking about having a “revelation” in that apartment in Paris where they were robbed, that prompted him to call Kim and tell her “We’re gonna have this baby.” Sure it contradicts most of what he already said, but the look on this security guy’s face is more priceless than jewels.

Kanye: God said if you f**k with my vision, I’m gonna f**k with yours.

As for Kanye’s actual platform, he said that he wants to get rid of Plan B (emergency contraception) but would not criminalize abortion. Instead, he would give a monetary incentive for pregnant women where “everybody that has a baby gets a million dollars or something in that range.” Octomoms and Duggars rejoice! Kanye also made the executives at Gap (and Adidas) shit their khakis by declaring he would walk away from his deals with those companies if they don’t give him a seat on the board. According to CNN:

Gap’s stock fell nearly 6% Monday following West’s comments he made at a public event Sunday. Videos taken at the event show the rapper criticizing Gap and Adidas, another apparel company his Yeezy brand partnered with.

Let’s see, what else. Oh, according to TMZ, even though he hasn’t spoken to him in a while, Kanye wants Jay-Z to be his VP (sorry Caitlyn). Never mind that he already has a running mate in Michelle Tidball (teehee), an “obscure preacher from Wyoming” who’s a crazy-eyed Michele Bachmann lookalike.

TMZ just reported that the rally was not a political success and that Kanye didn’t make the ballot in South Carolina as he had hoped. Let’s just leave him to his feelings while we enjoy some aspirational Official White House stationary Kanye threw up on his vision board.

Tags: Christian Genius Billionaire Kanye West, Kanye 2020, Kanye West, Kim Kardashian, Presidential
SHARE
Our commenting rules: Don't be racist or bigoted, or post comments like "Who cares?", or have multiple accounts, or repost a comment that was deleted by a mod, or post NSFW pics/videos/GIFs, or go off topic when not in an Open Post, or post paparazzi/event/red carpet pics from photo agencies due to copyright infringement issues. Also, promoting adblockers, your website, or your forum is not allowed. Breaking a rule may result in your Disqus account getting permanently or temporarily banned. New commenters must go through a period of pre-moderation. And some posts may be pre-moderated so it could take a minute for your comment to appear if it's approved. If you have a question or an issue with comments, email: [email protected]
src="https://c.statcounter.com/922697/0/f674ac4a/1/"
alt="drupal analytics" >