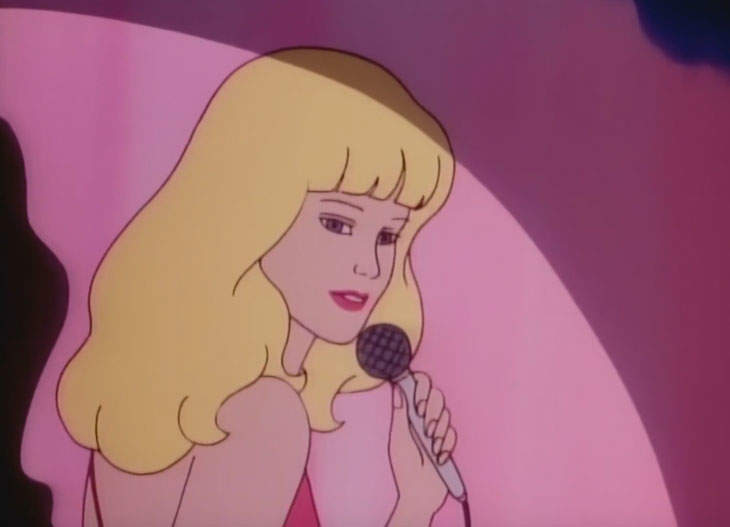 If we didn’t have Jacqui Benton, we wouldn’t have the truly outrageous pink diamond that is Jem! (Actually, we still would since Jem is not human and her real mother is the show’s creator Christy Marx, but just go with it!) Jacqui Benton was Jerrica Benton’s mother and she died so that Jem could live.

Like her daughter, Jacqui was a do-gooder who had a voice like a delicate crystal nightingale and stunning eyebrows that looked like they were scratched on by the most artistic chicken ever. Jacqui always wanted to be a singer but put those dreams on pause when she birthed out out Jerrica and Kimber. Since Jacqui was a foster child as a girl, she had a soft spot in her charitable heart for homeless girls so she and her rich ass husband Emmett Benton opened their home to many orphan girls (and the home later became the Starlight House).

When Jem got older, Jacqui could no longer ignore the tingle in her throat to yodel out gold-encrusted musical notes of perfection, so she got back into singing and she and Emmett started Starlight Music. Get into Jacqui serving sullen chanteuse dramatics:

Since Jacqui was back at the mic, she traveled a lot with her band to shows. And on January 31 in the late-70s, she had to get on a plane for a gig and while saying goodbye to her daughters, Jerrica got mad about her being gone all the time and refused to hug her. The plane ended up crashing and Jacqui died. Yes, this show got all-the-way deep. It was a show that had it all: masterpiece pop songs, more glamour than anyone can handle, Oscar-worthy performances, tear-inducing emotions, and serious situations. Even Batman’s like, “Damn, what a dark origin story.”

After Jacqui’s death, Emmett built a supercomputer that could link music and holograms. Jacqui was the inspiration for his hologram and he used her songs and likeness. But he didn’t want to get Elon Musk-levels of creepy so he didn’t make the hologram look like Jacqui. Emmett was also told by his doctors that he would go on to the cartoon heavens soon, so he programmed the hologram to be a mother to his daughters. And Synergy was born! And of course, then Jem and the Holograms were born!

And the rest is pop music and glamour history.

So Happy Mother’s Day to Jacqui Benton, Synergy, and all of the other mothers and mother figures out there!