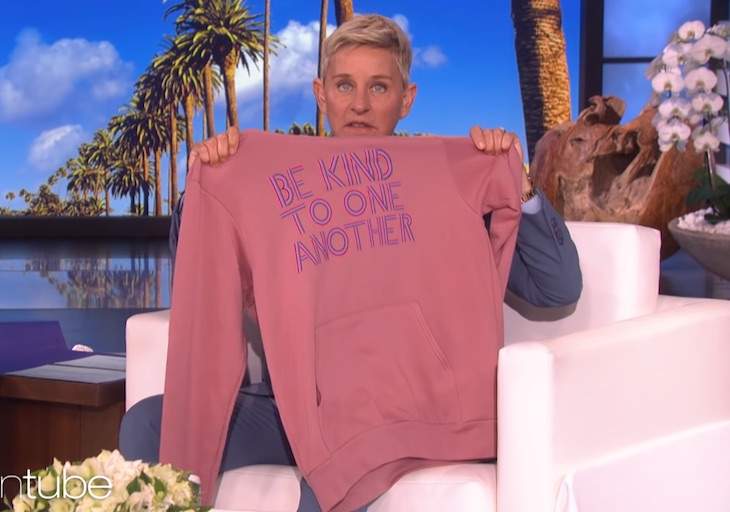 Ellen DeGeneres’ unofficial catchphrase might be “Be Kind To One Another,” but as we’ve learned many, many times, it might just be something that looks good embroidered on a hoodie and sold on the Ellen shop website for $55. Many have alleged that Ellen is The Devil in a pair of sneakers and an “Aw shucks” accent, but most of the stories are hearsay, or a friend-of-a-friend type anecdotes.

Variety how claims that numerous inside sources from Ellen’s show have given them an inside peek at what it’s like working for her during the COVID-19 shutdown. And if they’re telling the truth, then Ellen might want to go ahead and get a hoodie made up that says, “Be kind to one another, with the exception of most of the people who work on my show.”

Variety kept their sources anonymous, because they’re all technically still employed, and they obviously want to keep it that way. The core stage crew of Ellen is made up of more than 30 employees including lighting techs, camera operators, and grips. Ellen’s show went audience-less about a month ago, and officially stepped out of the studio on March 13th. Since then, Ellen has been broadcasting from one of her prison mansions, and conducting interviews with guests appearing via satellite. Only four core crew members are working on the remote broadcast, which means at least 26 are stuck at home, wondering what the Hell-en is going on.

According to sources, any employee that has reached out to producers to inquire about work hours, pay, or questions regarding their mental and physical health haven’t gotten a response in over a month. Sources claim that sometimes a producer will answer a phone call, but is evasive and won’t really respond with any meaningful information. Morale got worse when the crew discovered that Ellen had allegedly hired a non-union company to assist with the at-home broadcast, instead of bringing back her unionized crew members. Both crews have the exact same skill set. Hmmm…I wonder why Ellen wanted to go non-union? It couldn’t be because she wanted to save a couple bucks in the shadiest way possible. Oh wait.

Crew sources tell Variety that last week, someone finally contacted them, only to inform them that they’d all be taking a 60% pay cut, despite the show still airing every day. A spokesperson for Warner Bros. Television, who distributes Ellen, assured Variety that they’re not screwing the crew.

“Our executive producers and Telepictures are committed to taking care of our staff and crew and have made decisions first and foremost with them in mind.” The studio reiterated the crew has been paid consistently, though at reduced hours.

The rep also acknowledged that communication could have been better, but COVID-19 was making things confusing and disorganized. They also swear that no crew member has lost their job. In terms of those reduced hours, an insider says that when the crew returned from a scheduled week-long Spring Break back in March, they were informed they would be getting paid for 8 hours a day, down from 10 hours a day. Ellen is filmed four days a week. The crew had reportedly been informed they will be getting paid for two 8-hour days per week during the COVID-19 shutdown. There’s no word when production on Ellen will go back to normal.

But it sounds like a pay cut didn’t even need to happen in the first place. Variety says that not long after they started making calls to verify the claims of a pay cut, inside sources got back to them with the news that, SURPRISE! Miracle of all miracles, their pay was being restored back to what it was, and that they’d be compensated for that 60% that was taken.

Sources say that the Ellen crew is pissed that she’s preaching a message of kindness while trying to stiff them. Especially since she claimed on her April 7th show that she wanted to get back to work as soon as possible, if only for her staff and crew, adding, “I love them, I miss them, the best thing I can do to support them is to keep the show on the air.” Other TV talk show hosts have been showing their staff and crew how much they love them by – ahem – paying them. For example, Variety says that the salaries of stagehands for Jimmy Kimmel Live! have been paid out of Jimmy Kimmel’s own pockets.

Ellen reportedly makes $50 million a year from her TV show and has an estimated net worth of $330 million. Ellen could definitely dig a few pennies out of her sofa cushions and pay her crew herself. But would it even be worth it? It’s no secret that Ellen derives a sick joy from torturing people; she has made a part-time primetime career out of it. You know that in order to collect the money, you’d have to complete a humiliating 10-step obstacle course that ends with getting hooked up to a polygraph test and asked who your favorite daytime TV host is.

Tags: Coronavirus, Ellen Degeneres, You Pissed Somebody Off
SHARE
Our commenting rules: Don't be racist or bigoted, or post comments like "Who cares?", or have multiple accounts, or repost a comment that was deleted by a mod, or post NSFW pics/videos/GIFs, or go off topic when not in an Open Post, or post paparazzi/event/red carpet pics from photo agencies due to copyright infringement issues. Also, promoting adblockers, your website, or your forum is not allowed. Breaking a rule may result in your Disqus account getting permanently or temporarily banned. New commenters must go through a period of pre-moderation. And some posts may be pre-moderated so it could take a minute for your comment to appear if it's approved. If you have a question or an issue with comments, email: [email protected]
src="https://c.statcounter.com/922697/0/f674ac4a/1/"
alt="drupal analytics" >