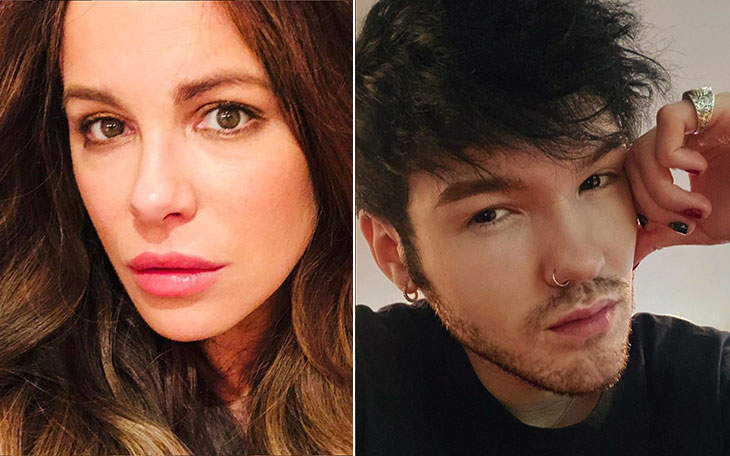 In these uncertain, confusing times, it’s nice to know that we can always count on on the comforting predictability in knowing that Kate Beckinsale definitely has a type. And that type is: young and dirt baggy. Us Weekly reports that Kate appears to have a new boy in her life. And Kate won’t have to break her brain from trying to remember names if she eventually meets all his friends, because she’s already dated two of them.

Kate has also been commenting on Instagram posts from Goody Grace (born name: Garrett Charles Nash), like she wrote “Peep x” on this one:

Goody has performed and worked with Kate’s (allegedly) last piece Machine Gun Kelly (29). Machine Gun Kelly is friends with Pete Davidson (26). Kate and Pete broke up last April. Before that, Kate was allegedly getting with then-21 comedian Matt Rife.

Kate and Goody have possibly been dating for longer than a minute. TMZ points out that they were first seen together back in January. That was the same month that Kate was allegedly getting with Machine Gun Kelly. So that would explain that. Goody Grace is legally his name; he changed it on his 18th birthday. And here’s a fact that no one needs, but that I’m throwing out anyway: Goody Grace is 19 months older than Kate’s 21-year-old daughter, Lily Mo Sheen. I’m sure that’s fun for everyone involved. Especially since those pictures of Kate and Goody’s casual hand-holding stroll on Sunday would lead you to believe that Kate and Goody are self-isolating together. Unless he was just stopping by for a visit? In this pandemic?! Someone needs to remind them of the six feet rule. Kate, just because you never make contact with a dude younger than 21 doesn’t mean you’re safe from COVID-19.

Tags: Goody Grace, Kate Beckinsale, Machine Gun Kelly, New Couple Alert, Pete Davidson
SHARE
Our commenting rules: Don't be racist or bigoted, or get into long-ass fights, or go way off topic when not in an Open Post. Also, promoting adblockers is not allowed. And some comment threads will be pre-moderated, so it may take a second for your comment to show up if it's approved.
src="https://c.statcounter.com/922697/0/f674ac4a/1/"
alt="drupal analytics" >