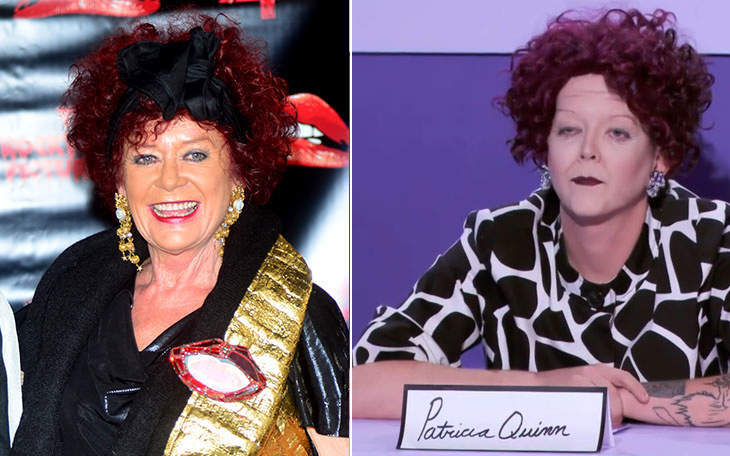 The queens played Snatch Game on last week’s episode of RuPaul’s Drag Race, and it was a mess from start to finish. From that picture, it may look like contestant Aiden Zhane is supposed to be Eleanor Abernathy after getting into a fight with a box of burgundy hair dye and losing. But Aiden is supposed to be 75-year-old Patricia Quinn, who played Magenta in the original stage production of The Rocky Horror Picture Show, as well as the movie. Well, Aiden played Patricia as a drugged-up has-been and didn’t even reference Rocky Horror. It seemed like Aiden had no idea who he was playing, and Patricia agrees. Patricia wants to do the time warp again by time warping back to before Aiden made the wrong decision to impersonate her so she can tell him, “Don’t.”

In the episode, Aiden, who (SPOILER ALERT) got eliminated, kept saying how he knew Patricia and the two had hung out a few times so he was excited to play her. But Aiden must’ve met a different Patricia Quinn because he didn’t even do her Northern Irish accent. Patricia gave her review of Aiden’s performance on Facebook, saying she was “disgusted beyond belief.” Patricia added that Aiden lied about knowing her and that she did not “know this utterly untalented person shite.”

Patricia gave a longer statement on this mess, saying she was “flattered that a young person wanted to portray me on a popular TV show but unfortunately this is where the flattery ends.” She wrote that she does not do drugs and that her career is doing fine. via Attitude:

“I did not respect being depicted as a washed up actress who has taken too many drugs… I am actually filming a new movie later this year and look forward to that and there will be no drugs on set! Well not from me anyway!”

Aiden has not commented about this yet, but what is there to say when the person you claim you’ve hung out with more than once, responds to that claim with, “I don’t know her”? I bet Aiden wishes they edited out his performance like they’ve been editing out catfish extraordinaire Sherry Pie all season.

Tags: Patricia Quinn, RuPaul's Drag Race
SHARE
Our commenting rules: Don't be racist or bigoted, or post comments like "Who cares?", or have multiple accounts, or repost a comment that was deleted by a mod, or post NSFW pics/videos/GIFs, or go off topic when not in an Open Post, or post paparazzi/event/red carpet pics from photo agencies due to copyright infringement issues. Also, promoting adblockers, your website, or your forum is not allowed. Breaking a rule may result in your Disqus account getting permanently or temporarily banned. New commenters must go through a period of pre-moderation. And some posts may be pre-moderated so it could take a minute for your comment to appear if it's approved. If you have a question or an issue with comments, email: [email protected]
src="https://c.statcounter.com/922697/0/f674ac4a/1/"
alt="drupal analytics" >