Cardi B Is Coming For Celebrities With Coronavirus, And Idris Elba Is Defending Them 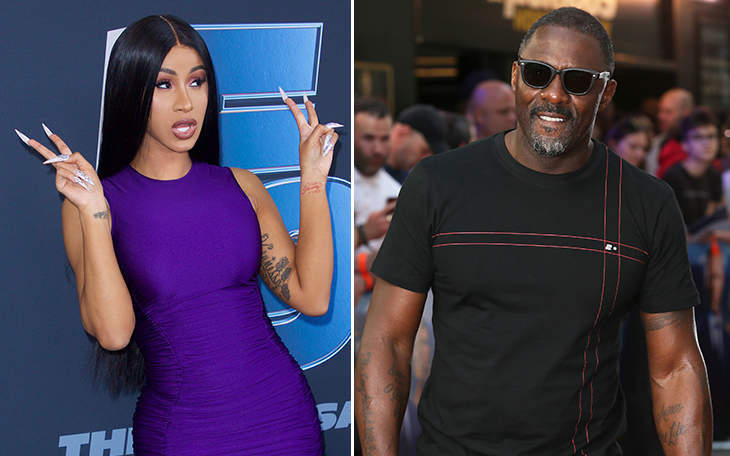 Many celebrities have shown no signs of coronavirus and yet they were able to get tested while peasants with actual symptoms have not. Like many, Cardi B has been wondering how so many famous types keep getting tested (answer: $$$$, fame, and connections), and she went even further by calling it a conspiracy. Well, corona pin-up Idris Elba wants you to stop “test shaming” and swears there’s no conspiracy. TEST SHAMING: Let’s not make that a fucking thing!

Cardi B accused rich people of “sounding like a motherfucking Flat Tummy Tea commercial,” when it comes to coronavirus. Cardi hopped on Instagram Live and made some hilarious comments on coronavirus while wondering how she’s supposed to know when to get tested if there are people testing positive with no symptoms. Cardi is starting to think that celebrities are getting paid to say that they’ve got it.

Cardi b has gone full crazy. I mean corona virus has made me see that Cardi is just one goddamn awesome person. 😂😂#COVIDー19 pic.twitter.com/G0143rGQrY

Idris and his wife Sabrina Dowhre have both tested positive and neither of them had symptoms, so he was one of the celebrities that Cardi B called out even though Cardi never mentioned his name. Idris said this while on Instagram Live:

I think the negativity around “test shaming” is counterproductive. I don’t see what people get out of that. Also this idea that someone like myself is going to be paid to say I’ve got coronavirus, that’s, like, absolute bullshit, such stupidness… People want to spread that as if it’s news. It’s stupid. It’s the quickest way to get people sick that way. There’s no benefit to me and Sabrina sitting here saying we’ve got it or we ain’t got it. I don’t even understand the logic of that.

Yes, again, “test shaming”? Idris’ mouth really did fart up that bullshit.  “I don’t think we should be “seat shaming” just because the rich people are getting the only lifeboats off the Titanic.” Well, guess what, Idris? Cardi had a lot more to say on this:

I really wanna let these celebrities know the confusion that the general public have… because if Number Forty-Five is getting on a podium saying: “Hey listen: If you do not have any symptoms of the Coronavirus… do not get tested because we don’t have enough testings to test everybody”–but if a celebrity is saying “Hey listen: I don’t have no symptoms… but I went and got tested & I’m positive for the coronavirus,” that causes confusion.

While wearing a mask in her own house, Cardi went on to point out that the middle-class and the poor aren’t treated the same as the rich (DUH), “They aren’t getting their fucking coronavirus results the next day–that’s one.” She also brought up the fact that not everybody has the luxury of a “big-ass house” to quarantine inside of and that the government needs to give poor people free tests and just “charge that shit to the game”.

Cardi B calls out celebrities & the government:

“If [Trump] is saying ‘if you don’t have any symptoms of the Coronavirus do not get tested because we don’t have enough tests’ but a celebrity is saying ‘I don’t have symptoms but I got tested & I’m positive’ that causes confusion” pic.twitter.com/VgKFqIBH8h

Well, here we are. Cardi B and Britney Spears are leading the class war. What. A. World.

Tags: Cardi B, Coronavirus, Idris Elba
SHARE
Our commenting rules: Don't be racist or bigoted, or post comments like "Who cares?", or have multiple accounts, or repost a comment that was deleted by a mod, or post NSFW pics/videos/GIFs, or go off topic when not in an Open Post, or post paparazzi/event/red carpet pics from photo agencies due to copyright infringement issues. Also, promoting adblockers, your website, or your forum is not allowed. Breaking a rule may result in your Disqus account getting permanently or temporarily banned. New commenters must go through a period of pre-moderation. And some posts may be pre-moderated so it could take a minute for your comment to appear if it's approved. If you have a question or an issue with comments, email: [email protected]
src="https://c.statcounter.com/922697/0/f674ac4a/1/"
alt="drupal analytics" >