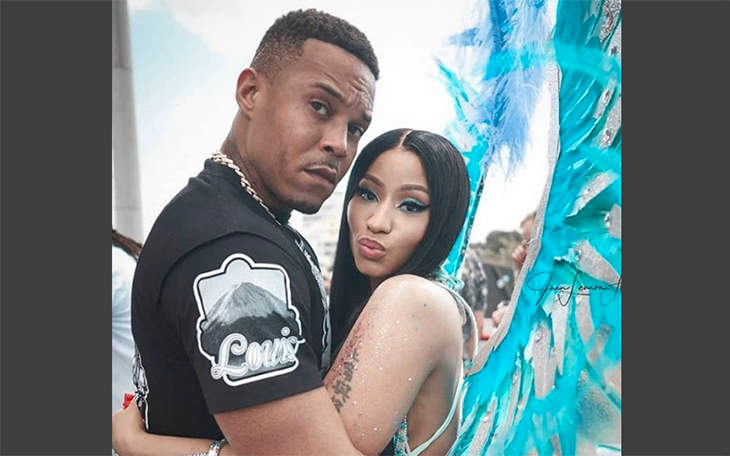 TMZ says there is some legal issues brewing for Nicki Minaj‘s husband Kenneth Petty. Mr. Minaj got into some trouble with California law enforcement. He forgot to register with the government. No, not register to vote in Super Tuesday, silly. He didn’t register as the sex offender he is! D’oh!

So in case you forgot, Kenneth is a registered sex offender in New York. Back in ’94 he pulled a knife on a 16-year-old girl and tried to rape her, spending a few years in prison before getting out. Then he shot a man dead and pleaded down to manslaughter from murder. He spent spent 7 years of a 10 year sentence in lock-up. He and Nicki knew each other back in the day and he is one of Nicki’s “first loves”.

They got married and now live in California since July 2019. And when you’re a sex offender and move states, you’re legally obligated to let the new state know that you once held a knife to a 16-year-old and tried to rape her. Back in November 15, Kenneth was pulled over in Beverly Hills, and the cops found out he was a registered sex offender in New York.

Kenneth was arrested and released after paying the $20,000 bond. But he was charged for failing to register as a sex offender. He still never registered, and so the feds stepped in, charging him on the federal level with failing to register. Kenneth had to turn himself in to US Marshals on Wednesday and faces up to 10 years in prison–which is a sentence he’s familiar with.

When Kenneth appeared in court, he pled not guilty. Kenneth was going to be put on house arrest, but thanks to the lawyer that Nicki paid for, he got off easy with just an ankle monitor and a curfew. He’s also not allowed to do any kind of drugs. He had to pay another $100,000 bond and give up his passport. And he’s under pretrial supervision. He has another hearing on March 23.

Well, did he think that California would never find out about him? I can already see Meek Mill having a field day with this the next time they cross paths at Maxfield WeHo. And ain’t this a hilarious bitch. Kenneth Petty hit the lottery by becoming Nicki’s kept piece after prison, and now because he was too busy spending her money, he may become the government’s kept piece AGAIN.

Tags: HAHA On You, Kenneth "Zoo" Petty, Nicki Minaj
SHARE
Our commenting rules: Don't be racist or bigoted, or get into long-ass fights, or go way off topic when not in an Open Post. Also, promoting adblockers is not allowed. And some comment threads will be pre-moderated, so it may take a second for your comment to show up if it's approved.
src="https://c.statcounter.com/922697/0/f674ac4a/1/"
alt="drupal analytics" >