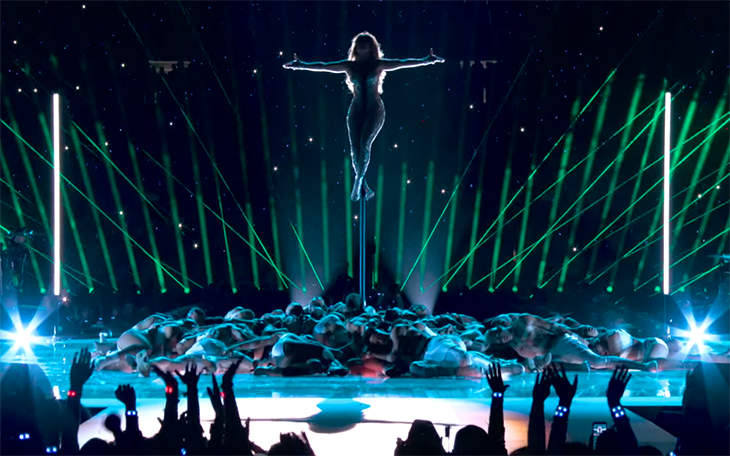 Super Bowl LIV (that’s 54 for us regular people) happened yesterday in Miami between the Kansas City Chiefs and the San Fransisco 49ers. Kansas City won–if you care about that sort of thing. But you know what I care about? THE HALFTIME SHOW! The real story here is about Oscar-snubee, Jennifer Lopez, and tax-avoidee, Shakira. The EYES OF THE CHILDREN are forever tainted this morning thanks to JLo and Shakira scandalizing the world with their ass shaking and coochie close-ups.

JLo also brought her 11-year-old daughter Emme to the Halftime Show, and so you know what that means. There are now articles like “5 Things To Know About Jennifer Lopez’s Daughter.” Meanwhile, after last night’s football game the only article I keep pitching is: “Who The Fuck Is Travis Kelce And Can He Break My Spine?“

This is called zaghrouta. It is a way to express joy or happiness in Arab culture. Elements of it can also be found in other cultures even as far as music in the Balkans. https://t.co/bixdVn34vF

And then JLo showed up on a stripper pole and gave us an Empire State reference:

#JenniferLopez performs at the #SuperBowl in a bespoke #AtelierVersace look. The top of this bodysuit is constructed as a leather jacket, while the sleeves and legs are hand-enriched with studs, Swarovski crystals and Medusa accents. #VersaceCelebrities #JLo #SBLIV #SuperBowlLIV pic.twitter.com/ee7UwNUyYo

Jennifer and Shakira were also very much running with the sisterhood empowerment angle, bringing out her daughter Emme to sing with her. Daddy, Marc Anthony, tweeted his support:

Emme Daddy is so proud of you. You are my ❤ and I am forever yours. pic.twitter.com/GLhmZOneBv

JLo showed her Puerto Rican pride by wearing a boa coat that had the Puerto Rican flag on one side and the American flag on the other. Billboard also notes a “subtle” mention of the border camps with children singing in illuminated cages.

Using kids in literal cages is as subtle as Jennifer’s feelings about her work on Hustlers. While the Academy may not have nominated her for an Oscar, JLo was not going to let her efforts go unrecognized.

That “JLo on the cross” imagery caused the best fireworks show I’ve never seen, and by that I mean, that I’m sure the heads of One Million Moms shot into the sky and exploded over this.

Tags: Jennifer Lopez, Shakira, Super Bowl
SHARE
Our commenting rules: Don't be racist or bigoted, or get into long-ass fights, or go way off topic when not in an Open Post. Also, promoting adblockers is not allowed. And some comment threads will be pre-moderated, so it may take a second for your comment to show up if it's approved.
src="https://c.statcounter.com/922697/0/f674ac4a/1/"
alt="drupal analytics" >