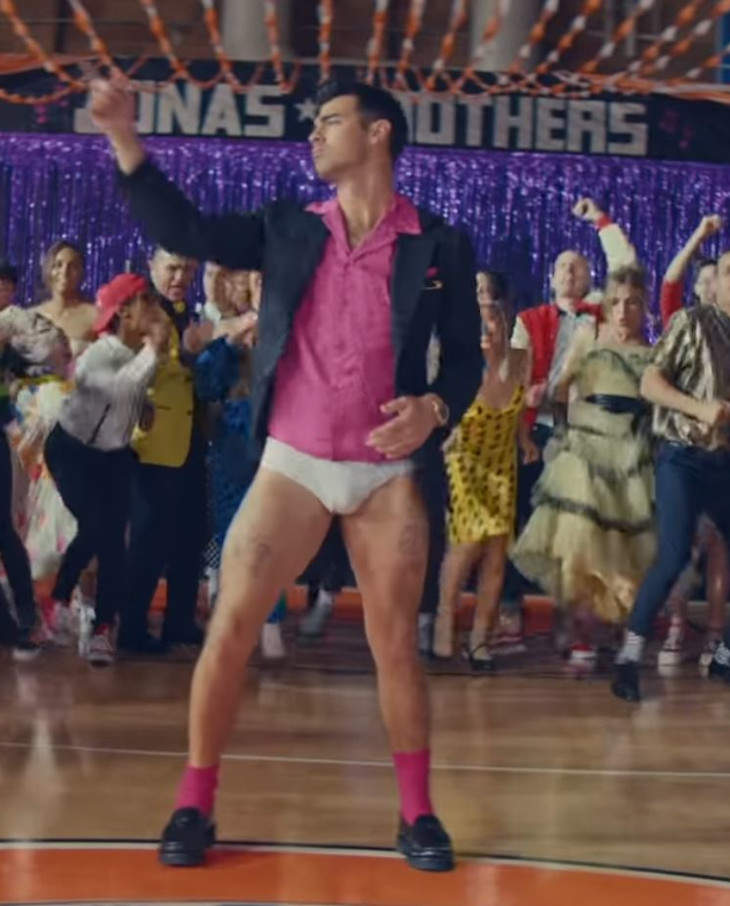 The Jonas Brothers got back together, remember? They have a new music video out for their latest single, What A Man Gotta Do, and like their previous video for Sucker, this one too costars all three Mrs. Jonases. In the video for WAMGD, with the help of their wives Priyanka Chopra, Danielle Jonas, and Sophie Turner, Nick, Kevin, Joe recreate scenes from Risky Business, Grease and Say Anything, which their young fans have probably never seen. But if you’re like me and watched The Circle on Netflix, you too may be wondering where the elusive 4th and 5th Jonas Brothers, Clayton and Steve, are. Maybe they’re unmarried, so they’ve been kicked out of the band. I guess wives are the new purity rings.

Here’s world famous Jonas Family Jamboree. It sure looks like they’re having a blast. Not sure I can say the same. It wasn’t really that fun for me as a viewer. I spent the whole time trying to figure out what these three movies had in common and marveling at Joe’s leg to torso proportions.

No wonder Matthew Modine lost that election. I still don’t get it though. These guys are in their mid-20s to early 30s so I’m confused as to who the adult Jonas Brothers are supposed to be for. Are their fans the same fans they had when they were at the height of their popularity? Did Kevin go out and recruit new dad fans in a Home Depot parking lot? Is the the actual final season of Game Of Thrones? I guess it will remain a mystery until Clayton and Steve decide to come out of hiding and start their own band. I’m pretty sure The Other Jonas Brothers are very much my jam.

Tags: Clayton and Steve Jonas, Danielle Jonas, Joe Jonas, Jonas Brothers, Kevin Jonas, Matthew Modine, Music Videos, Nick Jonas, Priyanka Chopra, Sophie Turner
SHARE
Our commenting rules: Don't be racist or bigoted, or get into long-ass fights, or go way off topic when not in an Open Post. Also, promoting adblockers is not allowed. And some comment threads will be pre-moderated, so it may take a second for your comment to show up if it's approved.
src="https://c.statcounter.com/922697/0/f674ac4a/1/"
alt="drupal analytics" >