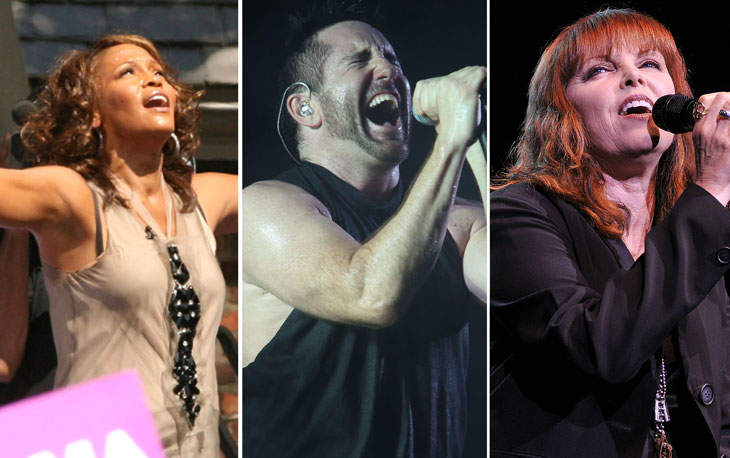 The inductees for the Rock and Roll Hall of Fame’s class of 2020 was announced today, and once again, Stacey Q, Samantha Fox, Grace Jones, Jem! and the Holograms, and Martika woke up to the fresh taste of SNUB (which tastes like the saliva flying off the tongues of those who are in charge of this sort of thing as they cackled into the air) because they didn’t make it in! The truth is, they weren’t ever expected to make it in since they didn’t make the short list (another ILLEGAL act). Pat Benatar did make the shortlist, but she didn’t end up in the final list of inductees. Neither did Rufus (featuring Chaka Khan). Oh, don’t worry, Pat and Chaka, you’re still in good company (along with Stacey Q, Samantha  Fox, Grace Jones, Jem!, and Matrika) in the Rock and Roll Hall of SNUBS.

The short list for the R&R Hall of Fame was made up of Pat, Rufus, Whitney Houston, Depeche Mode, Nine Inch Nails, Dave Matthews Band, Judas Priest, Kraftwerk, MC5, Motörhead, the Doobie Brothers, T.Rex, the Notorious B.I.G., Todd Rundgren, Soundgarden, and Thin Lizzy. Rolling Stone says that of those, Whitney, Depeche Mode, NIN, the Doobie Brothers, T.Rex, and Biggie got in. They will be inducted in a ceremony held at Cleveland’s Public Hall on May 2nd that will air live on HBO.

The inductees are chosen by a committee of rock historians. Dave Matthews Band won the fan vote but didn’t get enough votes from the committee to make the final cut.

Trent Reznor, who used to not give one ounce of a fuck about the Hall of Fame (NIN made the ballot three times before), is now happy to be included and he’ll be the sole member of NIN inducted:

“I’m pretty freaked out. I’m quite in shock. When I look back at how Nine Inch Nails are received, it always seems like we fall between the cracks. I don’t know if it’s a defense mechanism, but I just assumed we’d stay in that category, so I’m pleasantly surprised to see us acknowledged. It feels pretty good … I’m allowing myself, for a limited period of time, to feel good about this.”

Five members of Depeche Mode will be inducted including Vince Clarke who quit them in the 80s and went on to form Yazoo, The Assembly and Erasure. They tweeted out a thank you:

We’re honoured to be included as one of this year’s Rock and Roll Hall of Fame inductees, and to stand alongside the other incredible acts in the Rock Hall and those joining this year. A huge thank you to everyone who has supported us and our music over the years. #RockHall2020 pic.twitter.com/YV2UV8F7Fi

Congrats! Whitney has been inducted into the Rock & Roll Hall of Fame! 💫

This is the first year that Pat Benatar made the ballot, so she’ll probably end up as an inductee sooner or later. But even if she never does, who cares! Pat doesn’t need that shit today, tomorrow, or ever. Because she is already a part of a much more prestigious and exclusive club: The Artistes Who Have Performed On Charmed Club:

The Whitney Houston Estate will probably push for that creepy Whitney hologram to perform at the induction ceremony, but if the R&R Hall of Fame people want the ghost of Whitney to show up, they should get Paula Abdul to present her and sing a medley of her greatest hits. Yes, the ghost of Whitney would show up to slap everyone down for that, but show up she would!

Tags: Chaka Khan, Come Again?, Depeche Mode, I Don't Like Jokes, NIN, Notorious B.I.G., Pat Benatar, Trent Reznor, Whitney Houston
SHARE
Our commenting rules: Don't be racist or bigoted, or get into long-ass fights, or go way off topic when not in an Open Post. Also, promoting adblockers is not allowed. And some comment threads will be pre-moderated, so it may take a second for your comment to show up if it's approved.
src="https://c.statcounter.com/922697/0/f674ac4a/1/"
alt="drupal analytics" >