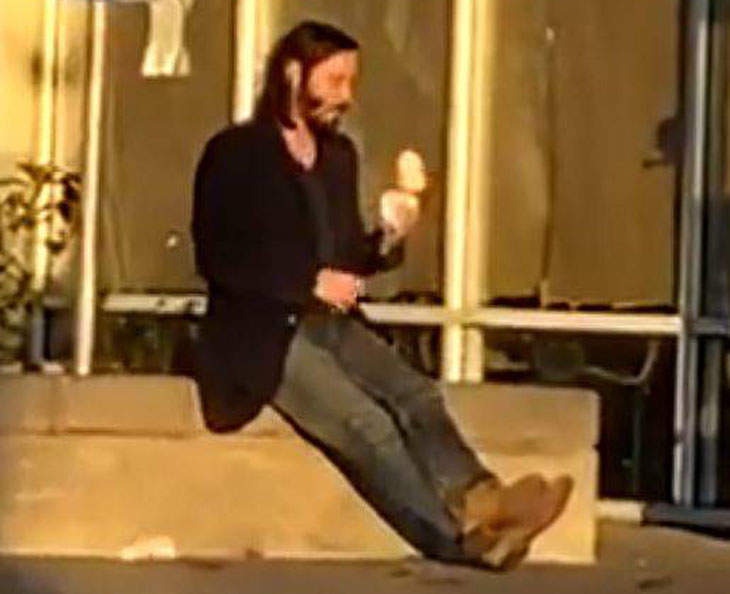 Last week my friend told me Keanu Reeves was in town filming Matrix 4 and we made plans to go to have dinner in Alameda so we could lightly stalk him. We both got tired and never made it out of the house so let me tell you I almost opened a vein when I read the news yesterday that Keanu was just spotted outside of an Alameda, California Baskin-Robbins, basking in the a golden East Bay sunset, giving an ice cream cone his undivided attention. And of course, Keanu being Keanu, left a huge tip and kindly posed with a fan. At Baskin-Robbins! My chance at a Keanu encounter shattered all because I didn’t have the fortitude to put a bra on and drive 8 miles, you know, just to see. Disappointed doesn’t begin to describe the heavy feeling on my spirit at this missed connection.

According to SF Gate:

Video shared to Twitter Monday evening shows the “Always Be My Maybe” actor casually seated on the curb outside of the ice cream chain, enjoying his cone in solitude. (Later, he was kind enough to pose for a photo with a young fan.)

A Baskin-Robbins employee named Abby told KTVU Reeves had walked into the shop around 5 p.m. that day. While she didn’t get to see Reeves herself, she said her colleague who was working the evening shift “freaked out” and “didn’t know how to act” when he saw the actor walk up to the counter. After the fact, a large sum of money was apparently left in the tip jar.

Here’s the masterpiece I’m calling Keanu With Flyaway Napkin, proceeded by a picture with the fan who made it.

You just KNOW that if or when Keanu saw that errant napkin he jumped up to grab it, even chasing it halfway down the street if he needed to, because Keanu would probably sooner date a harebrained trollop half his age than litter.

Tags: Keanu Reeves, Open Post
SHARE
Our commenting rules: Don't be racist or bigoted, or post comments like "Who cares?", or have multiple accounts, or repost a comment that was deleted by a mod, or post NSFW pics/videos/GIFs, or go off topic when not in an Open Post, or post paparazzi/event/red carpet pics from photo agencies due to copyright infringement issues. Also, promoting adblockers, your website, or your forum is not allowed. Breaking a rule may result in your Disqus account getting permanently or temporarily banned. New commenters must go through a period of pre-moderation. And some posts may be pre-moderated so it could take a minute for your comment to appear if it's approved. If you have a question or an issue with comments, email: [email protected]
src="https://c.statcounter.com/922697/0/f674ac4a/1/"
alt="drupal analytics" >