Walter Mercado Is Now A Bright Shining Star In The Universe 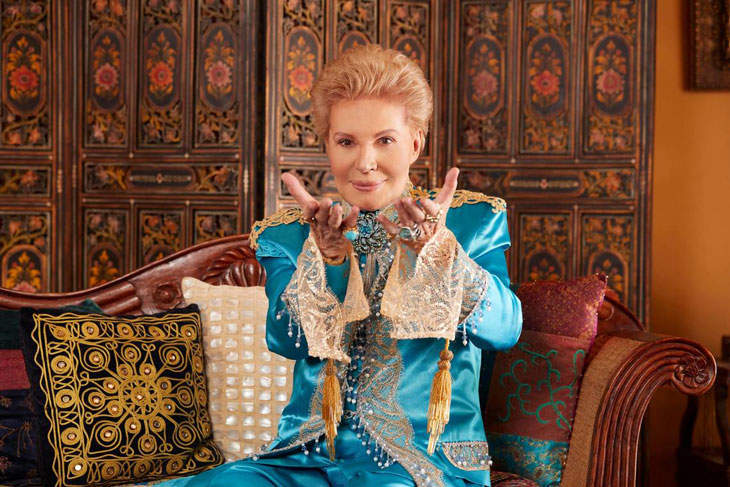 If you look up at the sky tonight and notice a particularly bright star that is shining something extravagant and causing you to pucker yourself raw, that’s the gloriously spectacular icon Walter Mercado who has returned to his homeland of the universe above us to continue to sparkle like he did on this planet. Earth is now much, much less brighter and opulent, because universal treasure Walter Mercado is no longer here. He was 87.

The Miami Herald says that Walter Mercado’s rhinestone-covered spirit left his outer shell late last night at the Auxilio Mutuo Hospital in San Juan, Puerto Rico. A rep for the hospital said that he died of kidney failure.

The magnificent estrella blossom came to this earth on March 9, 1932 and landed in Ponce, Puerto Rico. Walter studied psychology, the art of teaching, and pharmacy at university. One thing I did not know about Walter is that he started his career in entertainment as a dancer, and I searched for YouTube clips and didn’t find anything, which is probably a good thing, because I’d probably combust into a cloud of glitter from watching Walter leap and twirl.

Walter also acted in Puerto Rican telenovelas before he became the stunning star-reading space diamond we knew him as. When the guest of a Puerto Rican TV show didn’t show up, the producer asked Walter to fill in, and he decided to use his time in the spotlight to give astrological predictions while slathered in a gorgeous robe. That was the early 1970s, and it led to Walter getting his own astrology show. By the 1980s, that show spread to the Caribbean and the U.S. In the mid-1990s, Walter and Univision joined forces and his showed aired on Univision for 15 years.

Here’s a couple of clips of the jewel baby of Galileo and Liberace doing what he did best: stunning us with his predictions and glamour. Watching these clips just aren’t the same without my abuelita telling me to callarte so she could fully take in Walter Mercado’s reading of the stars!

In 2010, the same year that Walter and Univision broke up, he changed his name to his mystic name of Shanti Ananda, which means “peace and happiness” in Sanskrit. He ended up losing the rights to the name Walter Mercado after a legal fight with his ex-managers. At the end of 2011, Shanti Ananda started to have major health problems and he was  shuffled off to a hospital in Cleveland after he collapsed in Puerto Rico. We later found out that he had a heart attack.

Shanti Ananda went on to cover our eyeballs with his ethereal magnificence in commercials for Doritos and McDonald’s.

And just a few months ago, Walter Mercado made an appearance at the opening of an exhibit honoring him at the HistoryMiami Museum. The title of this video calls it an “epic entrance,” but I’d like to think this was a casual entrance for Walter Mercado and is how he went grocery shopping too.

Walter Mercado is now with the planets. Thank you for all the magic, opulence, glamour, predictions, and mucho, mucho, amors.

Tags: Sadness, Walter Mercado
SHARE
Our commenting rules: Don't be racist or bigoted, or post comments like "Who cares?", or have multiple accounts, or repost a comment that was deleted by a mod, or post NSFW pics/videos/GIFs, or go off topic when not in an Open Post, or post paparazzi/event/red carpet pics from photo agencies due to copyright infringement issues. Also, promoting adblockers, your website, or your forum is not allowed. Breaking a rule may result in your Disqus account getting permanently or temporarily banned. New commenters must go through a period of pre-moderation. And some posts may be pre-moderated so it could take a minute for your comment to appear if it's approved. If you have a question or an issue with comments, email: [email protected]
src="https://c.statcounter.com/922697/0/f674ac4a/1/"
alt="drupal analytics" >