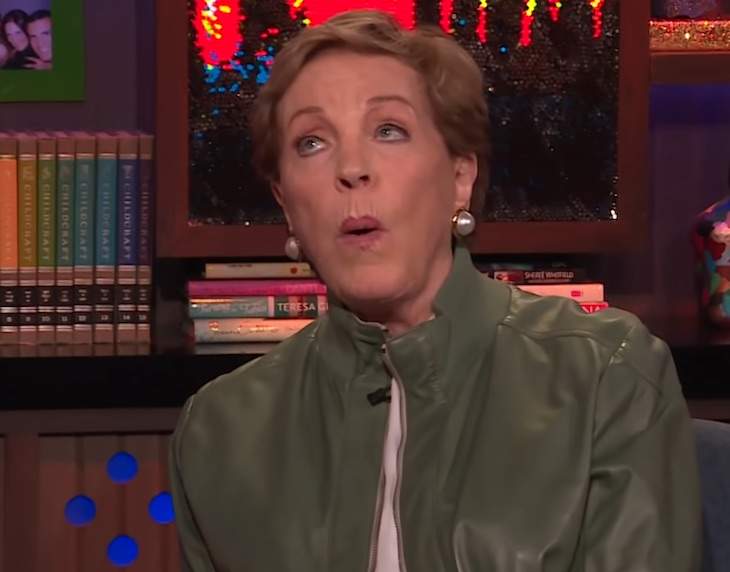 Dame Julie Andrews was recently on Watch What Happens Live, and she brought up a weird, random casting rumor. When The Wolf of Wall Street was but a twinkle in Martin Scorsese’s eye, it was rumored that angelic-voiced Broadway and film legend Julie Andrews would possibly be joining the cast. Then the movie came out, and Julie wasn’t in it. As it turns out, Julie had a very The Wolf of Wall Street reason for why she passed on the role. She was just too stoned on pills to do it,

Earlier this year, Esquire published a profile on the making of TWOST, and they said Martin Scorsese was hoping to get Julie for the role of Aunt Emma, because he thought people would want to see Mary Poppins in an R-rated movie. Sadly, Mary was too busy poppin’ pills.

84-year-old Julie explained to Andy Cohen that she had just had surgery on her ankle and she was soaring high on post-surgery pain killers. via Entertainment Weekly:

“I do regret it. I wasn’t able to do the movie. I had an operation. I’m a bionic woman and I have a titanium ankle. I was so truly stoned from all the drugs that I had to take to take the pain away. Really, it was mostly the anesthetics. I just wasn’t ready and I wanted to be and I would’ve loved to work with Scorsese.”

The role of Aunt Emma eventually went to Joanna Lumley.

I haven’t seen TWOWS since it came out six years ago, so all I really remember is Kyle Chandler’s turn as a horny-for-justice FBI agent, and that scene where Leonardo DiCaprio and Jonah Hill do too many Quaaludes and get extremely fucked up. That was easily the best scene of the movie. Who knew that Julie Andrews was basically living that out in real life? To be honest, this feels like a story she should have kept secret forever. Because not only should Mary Poppins have been in that movie, she should have played Jordan Belfort. And now I really want to see Julie Andrews crawl out of a white Lamborghini Countach and scream at Jonah Hill in her posh British accent: “Get off the fucking phooooooone!”

Tags: Julie Andrews, Martin Scorsese
SHARE
Our commenting rules: Don't be racist or bigoted, or post comments like "Who cares?", or have multiple accounts, or repost a comment that was deleted by a mod, or post NSFW pics/videos/GIFs, or go off topic when not in an Open Post, or post paparazzi/event/red carpet pics from photo agencies due to copyright infringement issues. Also, promoting adblockers, your website, or your forum is not allowed. Breaking a rule may result in your Disqus account getting permanently or temporarily banned. New commenters must go through a period of pre-moderation. And some posts may be pre-moderated so it could take a minute for your comment to appear if it's approved. If you have a question or an issue with comments, email: [email protected]
src="https://c.statcounter.com/922697/0/f674ac4a/1/"
alt="drupal analytics" >