The Michelle Williams who is not black and not in Destiny’s Child is still just as beloved at the cookout after last night Emmy awards. After Michelle won the Emmy for Lead Actress In A Limited Series for playing Gwen Verdon on FX’s Fosse/Verdon, she used her acceptance speech time to bring up the plight of women and equal pay, specifically how hard it is out there for women of color. Michelle Williams, come collect your to-go container with extra biscuit!

The Hollywood Reporter says that Michelle Williams got political when she thanked FX and Fox 21st Studios for actually listening to her and paying equally as the dudes:

“When I asked for more dance classes I heard, ‘Yes‘; more voice lessons, ‘Yes‘; a different wig, a pair of fake teeth not made of rubber, ‘Yes.’ All of these things they require effort and they cost more money but my bosses never presumed to know better than I did about what I needed in order to do my job and honor Gwen Verdon. And so I wanna say ‘thank you‘ to FX and to Fox 21st Studios for supporting me completely and for paying me equally because they understood that when you put value into a person, it empowers that person to get in touch with their own inherent value and where do they put that value? They put it into their work. And so the next time a woman–and especially a woman of color, because she stands to make 52 cents on the dollar compared to her white male counterpart–tells you what she needs in order to do her job, listen to her, believe her, because one day she might stand in front of you and say, ‘Thank you‘ for allowing her to succeed because of her workplace environment and not in spite of it.”

"My bosses never presumed to know better than I did about what I needed in order to do my job and honor Gwen Verdon." #FosseVerdonFX star Michelle Williams thanks her studios during her acceptance speech for lead actress in a limited series https://t.co/WmT1Fmyol4 #Emmys pic.twitter.com/DDF1ONJV7Z

Michelle wasn’t done. No, bitch! While in the press room, a reporter asked her about the fiasco with All The Money In the World where she was paid like a thousand times less than Mark Wahlberg. Imagine comparing their acting talents and thinking Mark Wahlberg deserved more. The gag of the century. Michelle got into pay parity again:

“It woke me up. I think that I’d always known how difficult it was–I’d known from the inside how difficult it was to feel like you were ever really getting ahead. And it’s felt like no matter how many accolades I amassed I still couldn’t make that translate into retirement money or something that really felt like long-term security. And so the discrepancy in All The Money In The World was so huge that it really illustrated a larger point not just for myself, obviously–but as I’ve said before if it was this difficult for me a white woman in a privileged industry, how difficult is it for women of color across all industries? And so while tonight is a kind of fairytale ending for me and for my own personal story: there really wont be any satisfaction for me until the larger message is heard. And that’s what I really wanted to point out tonight. When you look at the numbers: 52 percent on the dollar is what a hispanic woman will make compared to a white male. …The numbers rise incrementally as you go on. The numbers aren’t out yet for native women, but they expect them to be worse than for hispanic women.”

Michelle Williams: "It's felt like no matter how many accolades I amassed, I still couldn't make that translate into retirement money" | #Emmys https://t.co/QAW49RqLVv pic.twitter.com/ZAkiGbHHJQ

Michelle deserves that Emmy for the way she pronounces the word “white” alone! She said,“Hh-wite” males like Stewie says, “Cool Whip.” Get that equal money, Michelle Hh-Williams! Keep shaking down the rich Hh-wite man!

Here’s some pics of Michelle at the Emmys along with her new statue: 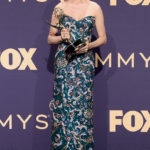 Tags: 2019 Emmys, Busy Philipps, Michelle Williams
SHARE
Our commenting rules: Don't be racist or bigoted, or post comments like "Who cares?", or have multiple accounts, or repost a comment that was deleted by a mod, or post NSFW pics/videos/GIFs, or go off topic when not in an Open Post, or post paparazzi/event/red carpet pics from photo agencies due to copyright infringement issues. Also, promoting adblockers, your website, or your forum is not allowed. Breaking a rule may result in your Disqus account getting permanently or temporarily banned. New commenters must go through a period of pre-moderation. And some posts may be pre-moderated so it could take a minute for your comment to appear if it's approved. If you have a question or an issue with comments, email: [email protected]
src="https://c.statcounter.com/922697/0/f674ac4a/1/"
alt="drupal analytics" >