I’m not even going to pretend like I won’t be at the matinee showing of Hustlers starring Jennifer Lopez this Friday, because I have been patiently waiting for this movie. Here you have JLo, a woman who has given us such powerless performances in Monster In Law and The Cell, finally coming full circle as a stripper seeking vengeance against rich dudes? Sign me up immediately and put extra butter on my popcorn. However, I may have been underestimating my expectations of JLo giving us stiff booty poppin’, ponytail whipping and doe eyes. Hustlers premiered at the Toronto Film Festival over the weekend, and some are claiming JLo should get an Oscar nomination. As Lida Rose hatches a plan to break into JLo’s house to shit all over her shoes, Constance Wu is seething!

According to People, the words “Oscar-nominated Jennifer Lopez” may become an actual fact:

In Hustlers, Lopez stars as Ramona, the head of a popular and successful strip club who aims to get the upper hand on her Wall Street clients with the help of her crew, which includes Wu’s Destiny.

In a tweet following the premiere, Vulture‘s Hunter Harris praised the film as “perfect” while predicting that Lopez will be nominated for her first Oscar for her performance.

Ok. I realize that JLo doing handstand tricks and making it clap on camera is probably a huge draw for this audience, but Oscar worthy, though? True, she can wear the hell out of a sparkly leotard and gyrate on beat like the best of them, however it must have taken quite a bit of soul searching for JLo to actually turn in a stellar performance. And honestly she agrees that being damn near naked while extras on set made it rain was very empowering.

“I’m used to being on stage in sexy costumes, but I have three layers of tights and fishnets and a bodysuit,” she said. “It was a brand-new feeling to come out practically naked, in front of all those men — 300 extras hooting and hollering — and dance for money.”

“There’s something liberating and empowering about it,” Lopez added, “but you’re really out there, physically, emotionally and psychologically.”

Sounds to me like Hustlers is Showgirls but with better acting, which is a bit disappointing. Clearly though I’m the only one who had low hopes for this movie.

#HUSTLERS was a JOY. Jennifer Lopez is a BEAST. Cardi is a natural talent. Seeing a movie like this with a woman (Lorene Scafaria) behind the camera gave it such a different energy than you traditionally get in a genre men like Soderbergh and Scorsese have made their own.

Congratulations JLo! Though I kind of feel bad for all the other stripper movies that came before hers because I’m sure they deserved Oscars as well. Elizabeth Berkley’s mispronunciation of Versace as Ver-SAYCE deserves honorable mention in hindsight. And the fight between Ronnie and Diamond in The Player’s Club? Best Choreography indeed! If JLo gets an Oscar for this shit, she better shout out all the hard working stripper moves that came before her. It’s only right.

Here’s JLo and some of the cast of Hustlers at TIFF: 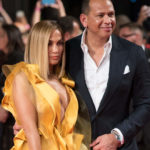 Tags: Hustlers, Jennifer Lopez
SHARE
Our commenting rules: Don't be racist or bigoted, or post comments like "Who cares?", or have multiple accounts, or repost a comment that was deleted by a mod, or post NSFW pics/videos/GIFs, or go off topic when not in an Open Post, or post paparazzi/event/red carpet pics from photo agencies due to copyright infringement issues. Also, promoting adblockers, your website, or your forum is not allowed. Breaking a rule may result in your Disqus account getting permanently or temporarily banned. New commenters must go through a period of pre-moderation. And some posts may be pre-moderated so it could take a minute for your comment to appear if it's approved. If you have a question or an issue with comments, email: [email protected]
src="https://c.statcounter.com/922697/0/f674ac4a/1/"
alt="drupal analytics" >