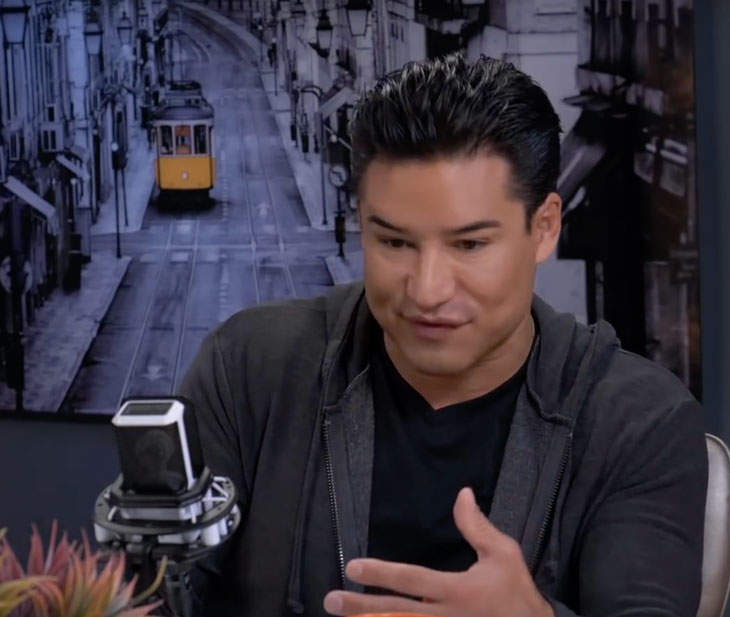 Mario Lopez, his new face, and Candace Owens (yes, THAT Candace Owens) got together for a talk on her YouTube show, and she decided to bring up a subject that truly disturbs her to the core: parents giving their children a safe space to freely be themselves and explore who they are without judgement. Mario and Candace brain-farted about what they call the “weird” Hollywood “trend” of celebrities letting their children “pick their gender.” And when the mind of Mario Lopez and the mind of Candace Owens touched on the subject of gender identity, a boiling shit wave of dumb erupted, so shit splatter-proof goggles ON!

Charlize Theron said a few months ago that her child Jackson, who was introduced to the world as a boy, told her one day, “I’m not a boy!“, at the age of 3. So since then, Charlize has been raising Jackson as a daughter. Candace decided to take a break from chanting “Send her back!” about an American citizen to tell us how strange and weird she thinks it is that parents like Charlize Theron are letting their child “pick” their gender.

Candace wants you to know that she doesn’t have children, but she was a nanny for five years, thankyouverymuch, so she knows that kids say all sorts of things. Candace then compared a child telling their parent that they’re a different gender to a child wanting to be a fictional creature like a mermaid. Candace called it a “weird trend,” and if Mario Lopez’s publicist was in the room, that would’ve been a great time to tackle him and drag him out of there,  or say, “Errrr, why don’t you talk instead about something like how you made your girlfriend get skinnier before being photographed together on the beach?!” The publicist also should’ve done that when Mario Lopez, who was accused of date rape, said that #MeToo is dangerous because people lie including women.

But Mario Lopez, who recently left Extra for Access Hollywood, decided to have a dumb-off with Candace Owens about the gender identity of children and really went for it by saying:

“I am trying to understand it myself, and please don’t lump me into that whole [group]. I’m kind of blown away too. Look, I’m never one to tell anyone how to parent their kids, obviously, and I think if you come from a place of love, you really can’t go wrong but at the same time, my God. If you’re three years old and you’re saying you’re feeling a certain way or you think you’re a boy or a girl, whatever the case may be, I just think it’s dangerous as a parent to make that determination then, ‘OK, then you’re going to be a boy or girl,’ whatever the case may be. And it’s sort of alarming and my gosh, I just think about the repercussions later on and um…”

Child expert Candace then added that the repercussions are “depression,” and she knows, because when she was in the fifth grade she totally dressed like A MAN (read: cargo pants) and it turned out to be a “phase” and everything was “fine” a year later. Candace says you can’t make a decision about your “sexuality” when you’re three years old

“That’s just it. When you’re a kid, at least when I was a kid, I remember… My daughter thinks some boys have cooties. You don’t know anything about sexuality yet. You’re just a kid.”

Candace believes that if she wanted to shave her head when she was a kid, and her parents let her be a boy, she’d later be very confused when she started liking guys (because you know, girls only like guys). Candace thinks it’s “narcissism” and “virtue signaling” on the part of the parent. And Mario then dove once again into the pool of stupidity that Candace mouth-sharted out.

“I think parents need to allow their kids to be kids but at the same time, you gotta be the adult in the situation. Pause with that and—I think the formative years is when you start having those discussions and really start making these ‘declarations.'”

Candace then said that Zoe Saldana is confusing her kids because she and her husband don’t take on the stereotypical roles of a mom and a dad. Like Zoe will fix things and her husband will do the dishes.

If only there was a voice of reason in the room who let Candace and Mario know that gender and sexuality are two different things and Charlize wasn’t like, “Oh, Jackson, you’re a woman?! Great, I’ll trash your cargo pants while you put on this dress so we can go flirt with guys at the bar, girlfriend. Pear martinis on me!” Candace and Mario’s brains would’ve malfunctioned more if they were told that.

Mario has supported the LGBTQ community before. He was the grand marshal of Miami Beach Pride in 2015, and he’s presented at the GLAAD Media Awards before. GLAAD hit at Mario for his words on Twitter, and PFLAG also let him know there’s a desk with his name on it in their teaching room:

Medical and psychological experts, and parents of children who are transgender, have long discredited the ideas that @MarioLopezExtra shared. The real dangerous action is when someone with a public platform uses bad science to speak against a vulnerable group of children. https://t.co/kz2pEMWTBm

It’s okay @MarioLopezExtra. We’re here to help provide more education on what being #transgender means, the difference between #sexualorientation, #sex, and #gender… and a whole lot of other things. https://t.co/ahjYTyenMD

Candace Owens and Mario Lopez saying dumb shit isn’t surprising, but what is surprising is that AC Slater went onto the show of a Trump-loving, ICE-praising ultra conservative. Like Mario Lopez, I am an American born citizen who isn’t white and I wouldn’t go on her show for obvious reasons, but partly because my nerves wouldn’t be able to take it! If an assistant came up to me before recording and said, “Would you like some ICE water before you sit down with Candace?”, the only remnant of me that would be left in that place would be my body outline in the wall after I busted out of their cartoon-style.

UPDATE: Because Mario wants to keep the checks coming from Access Hollywood, he apologized.

“The comments I made were ignorant and insensitive, and I now have a deeper understanding of how hurtful they were. I have been and always will be an ardent supporter of the LGBTQ community, and I am going to use this opportunity to better educate myself. Moving forward I will be more informed and thoughtful.”

Tags: Candace Owens, Dumbasses, Mario Lopez, My Brain Hurts
SHARE
Our commenting rules: Don't be racist or bigoted, or get into long-ass fights, or go way off topic when not in an Open Post. Also, promoting adblockers, your website, or your forum is not allowed. And some comment threads will be pre-moderated, so it may take a second for your comment to show up if it's approved.
src="https://c.statcounter.com/922697/0/f674ac4a/1/"
alt="drupal analytics" >