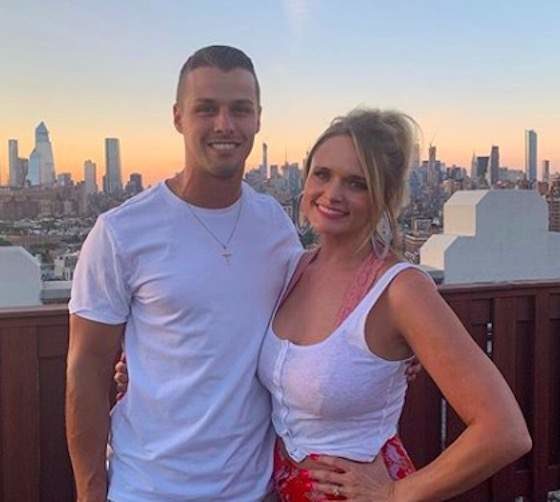 People are going to accuse Brendan McLoughlin of letting himself become a lazy, pampered trophy husband to country superstar wife Miranda Lambert because he’s taken leave from his job at the NYPD. Pampered? No sir! He does laundry. And has to maintain those abs so Miranda’s aggressive vagine doesn’t get restless. That’s work! Plus, it’s way less dangerous than being a cop unless he somehow mixes the bleach wrong and creates chlorine gas and asphyxiates himself.

People reports that Miranda’s cop hubby has hung up his handcuffs (for work purposes) for the moment.

A representative with the NYPD’s Office of the Deputy Commissioner Public Information tells PEOPLE that “Police Officer Brendan McLoughlin is on an authorized leave of absence.”

“The Department has rules and procedures governing leaves of absence by members of the service and complies with applicable law,” the rep adds of McLoughlin’s time away from his job.

In some interesting timing, Miranda’s “Roadside Bars & Pink Guitars” tour kicks off in two months, but it’s not known just yet if Officer McLoughlin will be hanging out shirtless on the tour bus for it.

It’s also unknown if Brendan is taking time off of work due to those rumors from back in May of their marriage already having problems. (Miranda and Brendan married after a whirlwind 3-month courtship last January. And he’s got an eight-month-old baby by another lady.)

Miranda recently posted a cutesy vid of her topless dude earning his keep by merging it with a single dropping announcement. She’s a sly one.

“It All Comes Out In The Wash (board)”. Tomorrow 6am ET#putthatsuckeronspin 💙😂🙋‍♀️👏😜 house husband shirtless promo vol 1. #NYPD #ihadto #hotcop #NEWSONG #yourewelcome

And why wouldn’t Brendan take an extended vacay? He’s making out on Miranda’s dime, according to Page Six.

McLoughlin, 27, made $92,125 last year working in the Midtown South precinct, according to payroll records.

Brendan can still collect on part of his retirement because he’s been with the NYPD for more than five years. There’s speculation that might be the plan. He was taken off foot patrol right after the wedding and assigned to drive the top brass around due to his newfound fame.

John Jay College of Criminal Justice professor and retired NYPD sergeant Joseph Giacalone speculated that the cop’s absence could be more about liability than living the high life.

“It might be in his best interest to use the accrued time then ride off into the sunset,” Giacalone said. “As soon as someone knows you’re married to a celebrity, they’re going to be looking to sue you.”

Truly. People knowing who he is could start throwing themselves in front of his patrol car for that Miranda money.

Tags: Brendan McLoughlin, Miranda Lambert
SHARE
Our commenting rules: Don't be racist or bigoted, or post comments like "Who cares?", or have multiple accounts, or repost a comment that was deleted by a mod, or post NSFW pics/videos/GIFs, or go off topic when not in an Open Post, or post paparazzi/event/red carpet pics from photo agencies due to copyright infringement issues. Also, promoting adblockers, your website, or your forum is not allowed. Breaking a rule may result in your Disqus account getting permanently or temporarily banned. New commenters must go through a period of pre-moderation. And some posts may be pre-moderated so it could take a minute for your comment to appear if it's approved. If you have a question or an issue with comments, email: [email protected]
src="https://c.statcounter.com/922697/0/f674ac4a/1/"
alt="drupal analytics" >