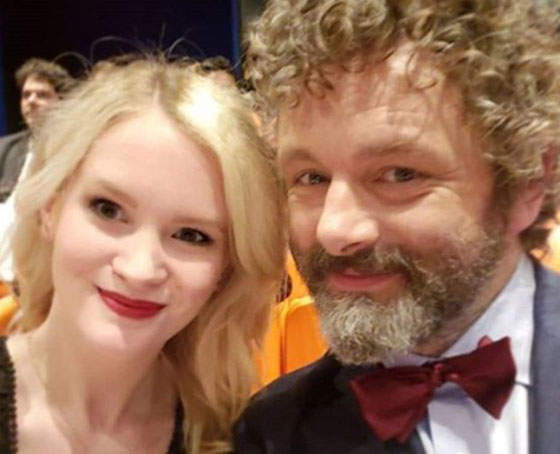 Michael Sheen is dating a woman half his age, “aspiring” Swedish actress Anna Lundberg. In fact, every time Michael Sheen gets a new girlfriend, she seems to be a full ten years younger than the previous girlfriend. Michael dated Sarah Silverman (48) for 4 years, breaking up in 2017. Then he dated Come Fly With Me actress Aisling Bea (35), from April 2018 to early 2019 and now he’s with a 25-year-old. Anna is only 5 years older than his daughter, Lily Mo Sheen whom he shares with Kate Beckinsale.

Kate recently broke up with Pete Davidson, who is also 25 years old. If they all spend the holidays together, their dinners are probably made up of Kate and Michael’s current piece explaining how TikTok works to them.

According to The Daily Mail

Michael Sheen has sparked up a new romance with an actress 25 years his junior, months after splitting from comedian Aisling Bea.

Since May this year, the actor, 50, has been romancing Swedish aspiring actress Anna Lundberg, 25, with the pair going Instagram official that month.

Anna, who bills herself as a ‘Swedish/NYC actress currently living in the UK’, shared a series of loved-up snaps with Michael as she accompanied him to the New York screening and London world premiere of his new show, Good Omens.

Anna shared the status of their relationship how most 25 year olds do: via Snapchat.

In one smitten snap, a glamorous Anna posed arm-in-arm with a suited and booted Michael in London, with the beauty writing:  ‘What an incredible night to be a part of!

‘Again I’m overwhelmed with pride and couldn’t be happier for Michael & the cast.’

Best of luck to these two. A 25 year age gap is nothing new in Hollywood, so maybe this will last forever! The good news for Anna is that Michael legally can’t date someone 10 years younger than her for another 3 years. So maybe there’s hope!

UPDATE: Well, it looks like Anna is sticking around for at least (insert how many more months she’s due to give birth) because she’s pregnant with a Sheen baby.

Very happy to let everyone know that my partner Anna and I are expecting a little angel of our own. (Just to be clear – we’re having a baby!) #nottheantichrist 🇸🇪🧝🏻‍♀️👶😇🏴󠁧󠁢󠁷󠁬󠁳󠁿

Tags: Age Ain't Nothin' But A Number, Michael Sheen, True Love
SHARE
Our commenting rules: Don't be racist or bigoted, or post comments like "Who cares?", or have multiple accounts, or repost a comment that was deleted by a mod, or post NSFW pics/videos/GIFs, or go off topic when not in an Open Post, or post paparazzi/event/red carpet pics from photo agencies due to copyright infringement issues. Also, promoting adblockers, your website, or your forum is not allowed. Breaking a rule may result in your Disqus account getting permanently or temporarily banned. New commenters must go through a period of pre-moderation. And some posts may be pre-moderated so it could take a minute for your comment to appear if it's approved. If you have a question or an issue with comments, email: [email protected]
src="https://c.statcounter.com/922697/0/f674ac4a/1/"
alt="drupal analytics" >