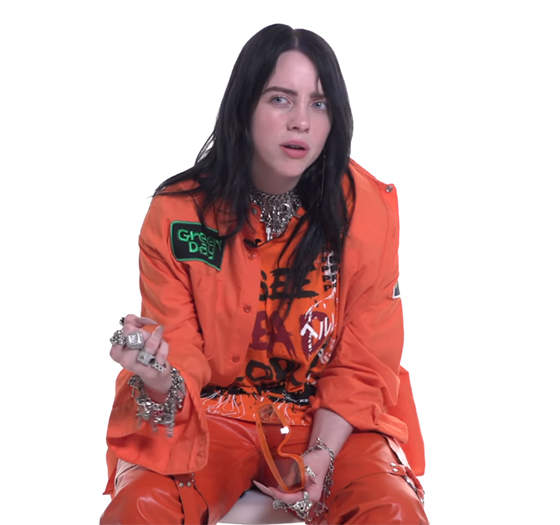 Listen, I like Billie Eilish, but this interview, it aged me fifteen years. When I was seventeen, never in my life would I have thought I would be become one of the “old people” who had no idea what the Hell the young people were up to. Billie Eilish has shown me that I am that person. In an interview for Pitchfork’s YouTube channel, she talks about her love of babies, being home-schooled, and how she has a particular hatred for ugly dudes who end up with hot chicks and then act like assholes. Peter Griffin, she’s looking at you.

NYLON reports that 17-year-old Billie Eilish is highly relatable… if you’re cool and hip and under the age of 20. It starts strong, it starts with her saying:

What… the fuck? Do not lick metal poles! Have you heard of tetanus?!

Billie also talked about how much she loves pooping (“One day I pooped eight times; it was the best day of my life.”), how she doesn’t get teenagers (bitch, me either) and a bunch of other stuff. The most relatable part (unless you love pooping way too much also) is when Billie laments ugly dudes who date hot girls and then think they can act like jerks:

“Why is every pretty girl with a horrible-looking man? I don’t understand. Listen I’m not shaming people for their looks–but I am though. You give an ugly guy a chance, he thinks he rules the world. I swear to god. Because they got a hot girl they can be horrible? Like… you’re still ugly though?”

Billie may be young but I’m glad to see the new generation is more on the ball when it comes to toxic men. I mean, she just exposed about 79% of marriages in Southern California. …I am a bit alarmed at the obsession with poops and licking of metal poles, but I guess that’s just generational differences!

Tags: Billie Eilish
SHARE
Our commenting rules: Don't be racist or bigoted, or get into long-ass fights, or go way off topic when not in an Open Post. Also, promoting adblockers, your website, or your forum is not allowed. And some comment threads will be pre-moderated, so it may take a second for your comment to show up if it's approved.
src="https://c.statcounter.com/922697/0/f674ac4a/1/"
alt="drupal analytics" >