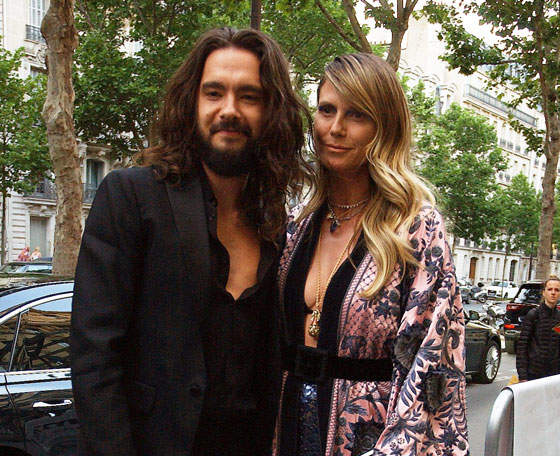 46-year-old Heidi Klum made 29-year-old Tom Kaulitz of Tokio Hotel her third husband, and she did it almost 5 months ago without anybody finding out. Heidi and Tom getting married makes sense, because even richies are looking to save some money and these two can obviously share pomade and dry shampoo. But it’s surprising that nobody found out until now, and not because people care about the marriage status of Heidi and Tom, but because you’d think the police would’ve been called after Heidi flew into a rage from Tom’s twin Bill Kaulitz struttin’ his ass in while looking more glamorous than her on her wedding day! And without even trying!  – Just Jared

Joshua Jackson and Jodie Turner-Smith were papped kissing, and while everyone is focusing on the kissing pictures, I’m focusing on Jodie serving Anne of the Gucci Boutique glamour with that hat – Lainey Gossip

A celebrity face for the pro-pegging movement (or should I say, celebrity butthole) has long been needed and who knew it’d be Steve Howey and Sarah Shahi? – Pajiba

I’m not sure if Directioners exist still, but if they do, they can be found with their tongues stuck to their laptop screens – OMG Blog

Since there’s really not even makeup lines out there, Lady Gaga is coming out with a makeup line and it’s just as eye rolly as you’d think – Celebitchy

Denise Nickerson, who played Violet Beauregarde in the only Willy Wonka movie I acknowledge, died yesterday after being taken off of life support at the age of 62. Rest in peace, Denise, may have be a place where that other Willy Wonka movie never plays (it is, I’m sure) – HuffPo