Open Post: Hosted By This Beautiful Statue Of Melania Trump 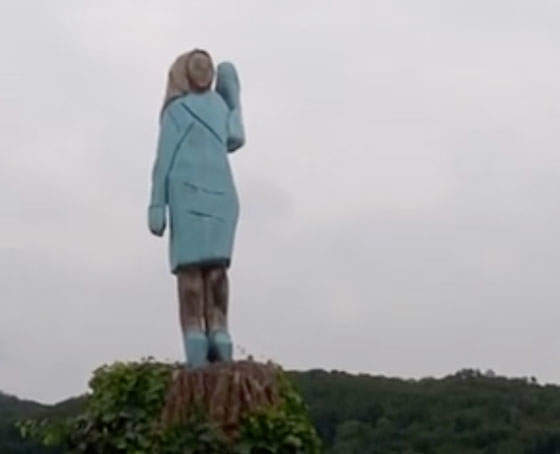 The reincarnation of Jackie O  has become so famous and important that she’s inspired art. First Lady Melania Trump is now a wooden statue overlooking her Slovenian hometown of Sevnica. Unfortunately, it looks like the sculptor was Cecilia Gimenez from SNL.

Mashable reports that artist Brad Downey had a vision, and he commissioned another artist, Ales “Maxi” Zupevc, to bring it to life. Out of a tree. With a chainsaw. That would account for the delicate facial features.

The wooden statue depicts Melania Trump wearing a blue dress and raising her left hand like she did at her husband’s inauguration in 2017. To honor the first lady, the sculpture now overlooks a field in Sevnica, but it’s receiving a slew of mixed reviews.

One of those reviewers was probably Melania who surely demanded to know why they carved her face to look like something a three-year-old with rabies might draw.

Melania Trump Receives Wooden Statue in Her Likeness in Slovenia — and Locals Have Mixed Reviews https://t.co/loxRoCdH01

“If the monument wants to be a parody, then the artist did succeed,” Nika, a 24-year-old local architecture student, told Agence France-Presse (AFP). “We in Sevnica can only laugh and, at the same time, hold our heads in our hands over their [the Trumps’] catastrophic reputation.”

Downey and Zupevc’s work was also referred to as a “Smurfette” and a “disgrace” by naysayers.

The artists stand by their work.

As for Downey, he gets people’s confusion, but wholeheartedly embraces the carving. “I can understand that people think they do not come very close to their physical appearance,” Downey told AFP. But he said he personally finds the work of art “absolutely beautiful.”

Melania should commission one of her own. And whenever she has to make an appearance with her husband, she can send one of these to do her usual task of standing woodenly beside the President for her. She can stay at home and it’s not like he’ll notice. His self-involvement is legendary and he’ll probably have months of conversation with the statue just to hear himself talk before he notices she’s not breathing and hasn’t changed her outfit in months.

Tags: Melania Trump, Open Post
SHARE
Our commenting rules are pretty simple: Don't be racist or bigoted, or go way off topic when not in an Open Post. If you see an offensive or spammy comment you think should be deleted, flag it for the mods and they'll be forever grateful and give you their first born (although, you probably don't want that).
src="https://c.statcounter.com/922697/0/f674ac4a/1/"
alt="drupal analytics" >