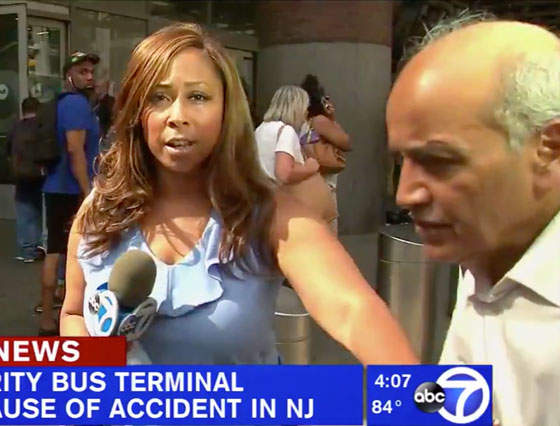 Darla Miles, the ninja reporter who was not about to let anyone step into her office without an invitation!

Navigating through the streets of NYC can be like playing a video game. You have to dodge, duck, jump, and sometimes bop a bitch to get to where you need to go. Darla Miles has been reporting from the streets of New York City for a minute, so she’s a master sensei when it comes to handling the human traffic of NYC. Darla unlocked the Bad Bitch Badge with the move she pulled on air the other day.

While reporting in the middle of a crowd about a terminal closing at Port Authority, a man, who looked like he was on auto-pilot, was about to walk right in front of Darla’s shot when her arm became a parking lot booth guard and dropped, directing the dude to go around her. Darla pulled that smooth detour move without missing a beat, flubbing a word, or taking her eyes off the camera. That dude in the blue in the screen shot above is far away but even he feels the badass energy in that move.

This is why we love Darla Miles 😆 #smooth pic.twitter.com/cXdNTNE4HM

I wish I was that quick when someone walks in front of me while I’m looking up at the menu at Rubio’s.

When that metaphors-filled clip went viral, some tried to call Darla’s ninja skills in question by saying that a producer or someone must’ve let her know that her shot-blocker was coming. But Darla set another trick correct by saying that she’s just a seasoned street reporter whose corner eye is always on:

Thanks Todd, but srsly I saw him coming. No one was waving him away. It’s just an acquired reflex after 10yrs of reporting on these #NYC streets!!💪🏽💪🏽🤣 https://t.co/d5U78tfyy8

Thanks! This is how keen your reflexes become after covering crime in #nyc for 10yrs!! And I’m loving the comments…I’ve been called a #ninja and #jedi!! Now I’m just waiting for my call from the @nfl and my @HeismanTrophy!! 🤣🤣🤣 https://t.co/09eOVDufVl

So now a New Yorker knows! When you’re zooming down the sidewalk and see a red light on a camera focused on Darla, that means you better stop and make a quick right out of Darla’s way. Because when that red light is on, it’s Darla’s world and you better not even think of fucking with her shot.