Reservations For The Taco Bell Hotel Sold Out In 2 Minutes 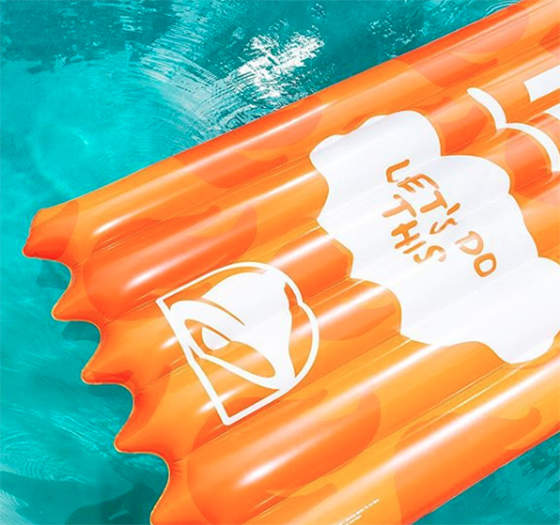 Delish reports that the new pop-up Taco Bell resort, The Bell, sold out of all its bookings in two minutes. You guys are animals! You’re just hovering over the Taco Bell weblink waiting to refresh the page like a college student trying to avoid a Friday class! You know what won’t take two minutes? The excruciating diarrhea/constipation-combo you’ll get from eating exclusively Taco Bell for four days in a row.

The Bell, which will open for one for a limited-time from August 8 to August 12 in Palm Springs, CA. There were 70 rooms available, starting at $169, and all 70 rooms were snatched up when reservations opened last Thursday. The Bell promises to have everything possible for the Taco Bell-enthusiast in your family. Pool floats, hot sauce room keys, a Baja Blast-inspired Freeze Lounge, and so much more. Baja Blast-inspired Freeze Lounge… now do you mean inspired by the beverage or people who drink it? Will it be like blue and Mountain Dew-smelling? Or will it be a Freeze Lounge in someone’s mother’s basement with a kid sitting on a couch wearing an Xbox headset shouting: “Fag!” playing Call of Duty?

But listen, if you didn’t book a room you can still go to the resort, eh? You can watch all the “entertainment” which promises a different “line-up” each day. Ooooh, I wonder if they scored any of those Coachella artists? Big names only, I’m sure. There will also be “brand-new” menu items getting “tested,” so you can be one of the first people in the world to shit blood after trying out the new Spicy Ranch Doritos Gordita Monster Wrap Supreme! And don’t forget to buy some “Taco Bell swag” from their gift shop! …What a Hellscape.

The Global Chief Brand Officer of Taco Bell, Marisa Thalberg, made this statement:

“Taco Bell fans are truly one of a kind, and today was one of the best expressions of that fandom yet. The Bell: A Taco Bell Hotel and Resort officially sold out in just 2 minutes. We would like to extend a big ‘thank you’ for those who have come along on this journey with us and even though The Bell is sold out, we’ll have more to share on exclusive merchandise, food and more in the coming weeks so those unable to score a room can still experience the fun from home.”

I hope that Taco Bell comes prepared, because if The Bell has sub-par amenities it will be a scene. Can you imagine if this turns into a Fyre Festival-but a hotel with Taco Bell-type situation? Oh girl, the “fandom” would be in chaos! Don’t run out of taco shells, it would be a literal shootout. Taco Bell stans are fucking crazy.

Tags: Taco Bell
SHARE
Our commenting rules: Don't be racist or bigoted, or get into long-ass fights, or go way off topic when not in an Open Post. Also, promoting adblockers, your website, or your forum is not allowed. And some comment threads will be pre-moderated, so it may take a second for your comment to show up if it's approved.
src="https://c.statcounter.com/922697/0/f674ac4a/1/"
alt="drupal analytics" >