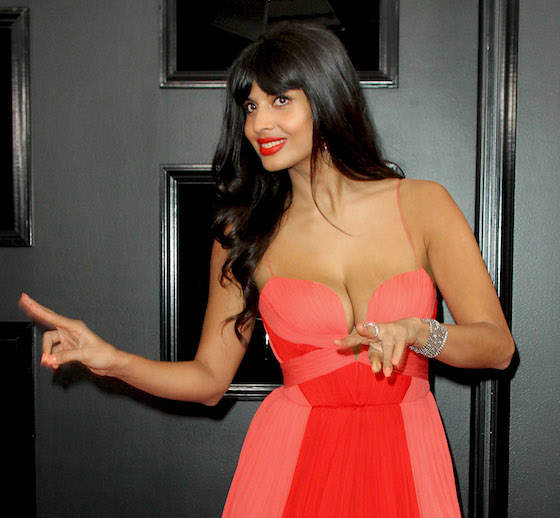 Earlier this week, Jameela Jamil called out Kim Kardashian’s KKW Beauty body foundation. Kim encouraged her followers to buy a foundation, which she claimed to use on her veins, bruises, and psoriasis. Not surprisingly, Jameela was firmly on the “Stop wasting your money on Kim’s crap and love your body the way it is” side of things. Well, nobody has to live in fear that Jameela will show up at their house and slap the bottle of KKW Beauty body foundation out of their hands, because she’s walking it back.

Jameela might have been inspired by the discussion she prompted after her initial tweets about the body makeup. Some people agreed with her. Others believed it was a personal choice whether someone wanted to cover themselves head to toe in makeup, and that it wasn’t any less “feminist” to do so.

I agree with everything else you say but honestly as someone with visible S/H scars over my body this would be an idea to be a) more comfortable in public b) helpful to those who would be triggered by scars.

I have the same condition as you on my legs, body and face. I also had to go through a lot to get to not feel shame. But what if a woman loves and accepts her body, is a feminist and still wants to wear body makeup?

Jameela joined in, saying she never said body makeup was anti-feminist, she was just approaching it from a place of possible sexism.

I never said wearing body make up makes you a bad feminist, or wrong in any way. I suggested that as men aren’t told to cover up, why should we have to spend the money and time doing so? Especially SUCH time consuming stuff. I just want to know *why* our perfection is expected… https://t.co/mU7UFtYnqW

The conversation around body makeup requires just a tiny bit more nuance than, let’s say, pregnant women pushing laxative tea. It’s not exactly an argument you can “win,” and so Jameela decided to let this one go. Yesterday, she filmed and uploaded a video to Twitter explaining she was sorry for coming in a little too hot on the whole body makeup debate. She just gets fired up when it comes to body image and self-esteem.

“I just wanted to say sorry for if I ever come across like a preachy wanker when I’m off on one of my rants about gender inequality, especially when it comes to beauty standards. Because they are fucking ridiculous for women. And they are worse for women than they are for men, and sometimes I just get very riled up. And I’m reading hundreds of letters a day from young people about how they feel suicidal, anxious, or depressed, they can’t leave the house because they feel too ugly because they can’t achieve complete perfection. Which is what society, social media, and fashion has told them is what’s expected of them.

Watching the worth of young people be diminished before they’ve even had the chance to work out who they really are just makes me furious, and then I go off on one and I don’t remember to think about how my tone is being perceived. You all aren’t in the room with me, seeing that I’m speaking from a place of love and passion and concern that you will make the same mistakes I made. I spent 20 years of my life having an eating disorder, and having the lasers, and using the creams, and drinking the detox tea and shitting fire. When I was a teenager, I would shit fire drinking these detox products I’m fighting.

Everything that I talk about negatively is stuff that I, almost always, have done myself, that I’ve made the mistake of putting my body through or my mind through, and that I’d like to stop you from doing, because nobody ever told me that I didn’t have to.

I would like to be a voice in the chaos that just tells you that you don’t have to, and we don’t have to think our entire worth is wrapped up in this shit. It wasn’t meant to judge you, I would never judge you. I would never have the right to, I’ve made more mistakes than any of you probably ever will. I’ve wasted more money and more time and more opportunities for happiness than many people in this world.”

I was thinking about how I can sometimes, in my passion, not take into account how much tone is lost in written text, and how I understand how that must rub people up the wrong way sometimes. Working on it. Listening. Hearing you always. ❤️ pic.twitter.com/gKo2XFl6W1

Let’s circle back to that whole part about shitting hot fire? Way to bury the spicy lede. That alone is all she needs to say to deter the youth from ever buying a box of Flat Tummy Tea. But more than that, I believe this is the second Kardashian-related Twitter apology of the week. Is Kris Jenner slipping into DMs and suggesting a retraction of any negative comments about her daughters, “or else“? I hope not. I’m pretty sure my fingers would quit and walk off my hands if I forced them to type the words “The Kardashians are obviously very talented natural beauties.”

Tags: Apologies, Jameela Jamil, Kim Kardashian
SHARE
Our commenting rules: Don't be racist or bigoted, or get into long-ass fights, or go way off topic when not in an Open Post. Also, promoting adblockers, your website, or your forum is not allowed. And some comment threads will be pre-moderated, so it may take a second for your comment to show up if it's approved.
src="https://c.statcounter.com/922697/0/f674ac4a/1/"
alt="drupal analytics" >