Open Post: Hosted By Tom Holland Talking About The Time That Jake Gyllenhaal Worked Him Out So Hard He Couldn’t Walk 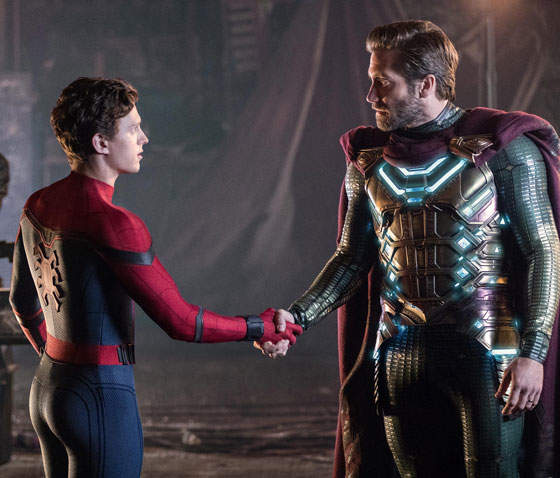 Tom Holland may only be 23 years old and newish to the game, but he can already teach other wannabe gay-baiters like Nick Jonas and Taron Egerton, how to truly bait a gay. All you gotta do is let out a cloud of innuendo while telling a story about how you worked out with Jake Gyllenhaal and he worked you out so hard that you had trouble walking. Suddenly, us hard-up, easy-to-woo gays are mindlessly pre-buying tickets to the next Spider-Twink movie after being hypnotized by the image of Mysterio defeating Spider-Twink by pounding a paralyzing ray into him, leaving him dead-legged and his spidey tenses tingling something raw. Yes, I’ve thought about this.

Tom was on The Late Show with Stephen Colbert and Colbert brought up the bromance of Tom and Jake Gyllenhaal (who plays Mysterio in the new Spider-Man movie) and asked if they hang out. Tom told the tale about while in China together, Jake asked him out on a gym date. Now, it’s been approximately 78 centuries since I was in a gym last, so I have to keep up with the goings-on at a gym by watching SeanCody scenes. And from watching SeanCody, it seems that when two guys work out together, they end up topless, then naked, then they do ass sex, and then one gets anal creampied on a bench press. I thought that was standard when two guys work out together. But according to Tom, he and Jake just worked out and the scene he painted is straight out of Spider-Man: Far From Homo.

Tom said that he was a little hesitant about working out with Jake since Jake is a hairy pillar of muscle, but he did anyway, and when he tried to keep up, he ended up with wobbly legs.

“There’s a law in the gym that you can’t run slower than the guy next you. You just can’t. So I’m running next to him, two minutes in, I’ve got a stitch, I’m wishing everything was over. But I’m saying, there’s nothing that’s going to get me off this treadmill. I will beat Jake Gyllenhaal in this race. And then like three, four minutes in, he goes, ‘Tom, this is too easy. Let’s up the incline.’ I’m like, ‘Yeah, I was thinking the same thing. Let’s do it.’ So we up the incline, four or five more kilometers go by, he goes, ‘This is too easy. Let’s up it to three.’ And I’m like, ‘Oh my goodness. Fine, yeah, Jake, absolutely.’ By the end, we’ve got a kilometer left, he’s like, ‘Let’s do three point five.’ And I’m like, ‘Dude, let’s do four. Why three point five? Why so stop there?’ And then we’re doing press later that day and I can’t walk.”

Tom is working it on this press tour. Not only is he saving LIVES like a true Spider-Man, but he’s gay-baiting us with the seeds of some Spider-Twink/Mysterio gay fanfic. I’ll take it. I’m sure that on his next talk show appearance, he’ll talk about how he and Jake hung out one night in Mexico City, and it ended with him suffering from busted guts and a raw asshole…. because Jake made him eat really spicy food and it gave him diarrhea.

Tags: Jake Gyllenhaal, Open Post, Tom Holland
SHARE
Our commenting rules: Don't be racist or bigoted, or get into long-ass fights, or go way off topic when not in an Open Post. Also, promoting adblockers, your website, or your forum is not allowed. And some comment threads will be pre-moderated, so it may take a second for your comment to show up if it's approved.
src="https://c.statcounter.com/922697/0/f674ac4a/1/"
alt="drupal analytics" >