Open Post: Hosted By Boy George Leaving “The Voice” After A Contestant Pissed Him Off 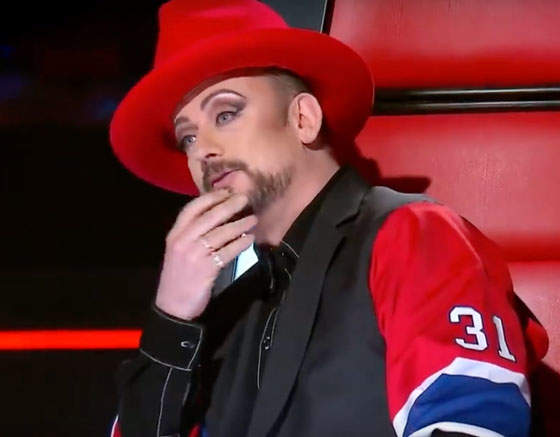 Now you know that if you really want to hurt Boy George, be a contestant on The Voice Australia and tell him that nobody cares if you play guitar. That’ll do it.

During the blind audition on last night’s episode, 20-year-old Daniel Shaw yodeled out Beneath Your Beautiful while playing the piano, and it made all four judges (Kelly Rowland, Guy Sebastian, Delta Goodrem, and Boy George) swing their red chairs around in hopes that he’d choose them. As the judges tried to woo Daniel to their team, Boy George asked Daniel, “Do you play guitar?” Daniel answered back with, “I can play guitar but no one really cares if I play guitar.”

I did sense a tiny touch of rudeness in Daniel’s response, and it seems like Boy George did too, because his eyes widened as he asked, “No one cares?” To which Daniel responded by shaking his head. And after Boy George let out an, “I do,” he furiously stroked his chin pubes and filled to the top with annoyance before saying, “After that comment, go with Delta.” He continued to stew and spit out words, and then he couldn’t take it anymore and busted out a very reasonable response by grabbing his phone and quitting that bitch.

On a scale of rudeness ranging from Not Rude to Chaining A Norwegian Escort To Your Radiator, I’d say Daniel’s response wasn’t that rude.

Boy George ended up coming back and apologized, saying he misheard Daniel.

“I just misheard what was said, and I just went, you know when you go in the moment? I am kind of fine now and I’m a bit embarrassed. I’m cool, I’m not annoyed, I was just annoyed in the moment. I’ve got to go and find somewhere not to be embarrassed. I’ll have to be tied to my seat.”

Staged tantrum or not, Boy George shouldn’t be embarrassed, because that kind of over-the-top diva shit is a good reason to watch The Voice. I’d watch The Voice U.S. if messiness like that went down, and by that I mean if Blake Shelton stormed off the set and never came back again.

Tags: Boy George, Open Post, The Voice
SHARE
Our commenting rules: Don't be racist or bigoted, or get into long-ass fights, or go way off topic when not in an Open Post. Also, promoting adblockers, your website, or your forum is not allowed. And some comment threads will be pre-moderated, so it may take a second for your comment to show up if it's approved.
src="https://c.statcounter.com/922697/0/f674ac4a/1/"
alt="drupal analytics" >