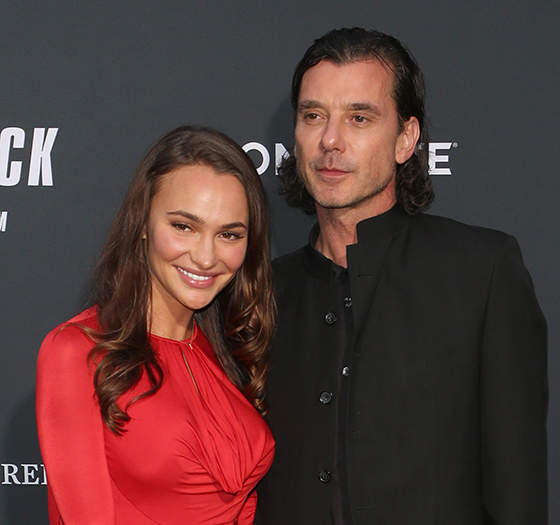 Gavin Rossdale and Gwen Stefani broke up in 2015 after 13 years of marriage (a decision that Gavin regrets, or regretted anyway). Since then Gwen has had a pretty public… okay, highly public, relationship with Blake Shelton. She just couldn’t shut up about it–she’s in love. As for Gavin, he hit the rebound too, getting on a 27-year-old model from Germany. Well it looks like that didn’t work out, because 53-year-old Gavin has a new girlfriend and he’s traded in for an even newer model–this one is 26. He bangs the nanny and he gets a girlfriend half his age after the divorce. Quick: buy a fast, red car to fully complete your male cliché!

E! News is reporting that Gavin Rossdale and model Natalie Golba attended the New York world premiere of John Wick: Chapter 3 – Parabellum. And then–because watching people get viciously killed in highly-choreographed fights scenes is always better the second time around, the couple attended the Los Angeles premiere last Wednesday. A flight to L.A. and a movie premiere, living the high life, Natalie! Gavin doesn’t completely have no reason for going to so many premieres, because his band Bush is featured on the soundtrack–their song Bullet Holes is the title track for the movie.

So Gavin is really showing off his hot young piece. I’m always somehow amazed when I see couples like this. I shouldn’t be–how many older dudes pick up young women? But like… what do these girls talk to their boyfriends about? On a Venn diagram of Natalie’s interests and Gavin’s interests, how many overlapping points would there be? Regardless, Natalie better plan ahead. Gavin broke up with his last girlfriend, Sophia Thomalla, just before she turned 30. So Natalie’s got four more years until Gavin gets himself a 25-year-old. Enjoy these premieres, sis! Grab as many swag bags as you can! Tags: Gavin Rossdale, New Couple Alert
SHARE
Our commenting rules: Don't be racist or bigoted, or post comments like "Who cares?", or have multiple accounts, or repost a comment that was deleted by a mod, or post NSFW pics/videos/GIFs, or go off topic when not in an Open Post, or post paparazzi/event/red carpet pics from photo agencies due to copyright infringement issues. Also, promoting adblockers, your website, or your forum is not allowed. Breaking a rule may result in your Disqus account getting permanently or temporarily banned. New commenters must go through a period of pre-moderation. And some posts may be pre-moderated so it could take a minute for your comment to appear if it's approved. If you have a question or an issue with comments, email: [email protected]
src="https://c.statcounter.com/922697/0/f674ac4a/1/"
alt="drupal analytics" >