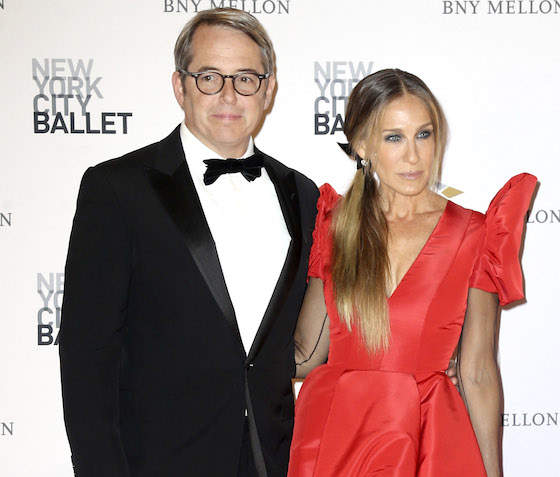 I don’t personally know the dynamic that exists in Sarah Jessica Parker and Matthew Broderick’s marriage. Is it happy? Mundane? Communication made solely through the intercom of their multi-million-dollar Manhattan townhome? Who even knows. Except for The National Enquirer, who thought they had it all figured out. They were all ready to go with a story exposing THE CURRENT TRUTH about Sarah and Matthew. But it didn’t get very far after Sarah decided to shut down the story before it ever saw the light of day.

SJP stirred the pot yesterday on Instagram by posting a screen grab of an email she allegedly received about a story set to run by The National Enquirer. Matthew is currently in London for the theatre production The Starry Messenger. According to The National Enquirer, Matthew took the drama off stage and into the street, where he and SJP were caught a few days before their 22nd wedding anniversary, screaming at each other during and after dinner about how much time he was spending in London.

The email requested that SJP provide a statement regarding the alleged fight. She gave them a statement on the situation, which was basically that there was no situation, and they were making the whole thing up. Oh, the $200,000 dick pic magazine is making stuff up? Huh, never would have guessed.

Just like clockwork. Over a decade of the same untrue, disgraceful nonsense. As usual, days ahead of our anniversary on May 19th, The National Enquirer is making its annual best effort to fabricate and undermine, this time a blissful 4 days with my husband in London. There was no “screaming match” as alleged in a restaurant or on the street, nor was there a confrontation as alleged about his time in London. My children and I are enormously proud of the work he is doing. After much thought I have decided to share a typical letter of “inquiry” from these people. As if the truth, a response or any comments from me or my publicist had any bearing on what they threaten to “report” . Hey National Enquirer and your sister publications, why not celebrate a marriage of 22 years and relationship of 27 years? Because, despite your endless harassment and wasted ink, we are nearing 3 decades of love, commitment, respect, family and home. There’s your “scoop” From a “reliable source”. #tabloidharassment

SJP is pretty damn sure that she never got into some angry-voiced theatrics with Matthew Broderick on the street. And this isn’t the first time she’s sworn up and down on her Manolos that she wasn’t engaging in any kind of high-pitched screaming fight. But if I had to guess, I’d say that The National Enquirer really is lying, and there was no screaming match. Of course, I’m basing this on nothing but that red hot body language in the picture above. You can’t tell me that SJP and Matthew Broderick’s version of fighting doesn’t involve passive aggressively repositioning their various awards on the fireplace mantle. “Excuse me, but I believe my TWO Tony awards were there…“.

Tags: Matthew Broderick, Sarah Jessica Parker, You Pissed Somebody Off
SHARE
Our commenting rules are pretty simple: Don't be racist or bigoted, or go way off topic when not in an Open Post. If you see an offensive or spammy comment you think should be deleted, flag it for the mods and they'll be forever grateful and give you their first born (although, you probably don't want that).
src="https://c.statcounter.com/922697/0/f674ac4a/1/"
alt="drupal analytics" >