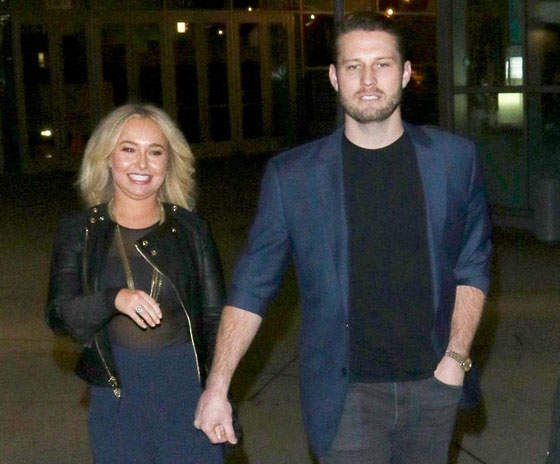 When we last heard from Hayden Panettiere, she shut down a rumor that she hasn’t seen much of her 4-year-old daughter, who lives in Ukraine with her ex and her daughter’s father Wladimir Klitschko. Hayden didn’t respond to the rumor with words, but she really didn’t have to since her boyfriend of about a year, wannabe actor/real estate agent/unofficial voice of Hayden Panettiere Brian Hickerson, said words for her and burped up statements about her relationship with her daughter. But why do I have a feeling that Chatty Brian is going to keep his flappin’ lips firmly shut over this latest Hayden news?

Last year, cops were called to a messy scene in Greenville, South Carolina when a drunken Brian allegedly attacked his dad, leaving the man bloody and bruised. When cops showed up, they reportedly found a frantic and drunk Hayden, and also saw Brian chasing his dad with a Gatorade bottle. That’s some Cops shit. Brian was arrested for domestic violence. Well, Brian’s been arrested again, only this time he got busted in Los Angeles and is accused of attacking Hayden. Hayden’s life is still like a tragic Juliette Barnes storyline on Nashville.

TMZ says that Hayden and Brian went drinking on Wednesday night, and when they got home, they got into a fight that turned physical. The cops were called, and when they showed up at 2 on Thursday morning, they found redness and marks on Hayden’s body. After interviewing Hayden and Brian, the cops decided that Brian started the fight and arrested him. He was booked on felony domestic violence and released later that day on $50,000 bond.

Hayden’s friends have said before that her relationship with Brian isn’t right and they’re worried for her.

The father of Hayden’s daughter is a 10 foot tall boxing Ukrainian mountain range of muscle who can easily turn Brian to dust just by softly cracking the knuckles of his best punchin’ hand. So Hayden can always call him. But if she doesn’t want to do that, she can call her Aunt Viki Lord whose angriest personality will come out to handle a trick for messing with her niece. Yes, I loved Hayden Panettiere as Juliette from Nashville, but to me she will always be the daughter of goddess Tina Lord and Cord Roberts from One Life to Live.

Tags: Arrests, Brian Hickerson, Hayden Panettiere, Trash
SHARE
Our commenting rules: Don't be racist or bigoted, or post comments like "Who cares?", or have multiple accounts, or repost a comment that was deleted by a mod, or post NSFW pics/videos/GIFs, or go off topic when not in an Open Post, or post paparazzi/event/red carpet pics from photo agencies due to copyright infringement issues. Also, promoting adblockers, your website, or your forum is not allowed. Breaking a rule may result in your Disqus account getting permanently or temporarily banned. New commenters must go through a period of pre-moderation. And some posts may be pre-moderated so it could take a minute for your comment to appear if it's approved. If you have a question or an issue with comments, email: [email protected]
src="https://c.statcounter.com/922697/0/f674ac4a/1/"
alt="drupal analytics" >