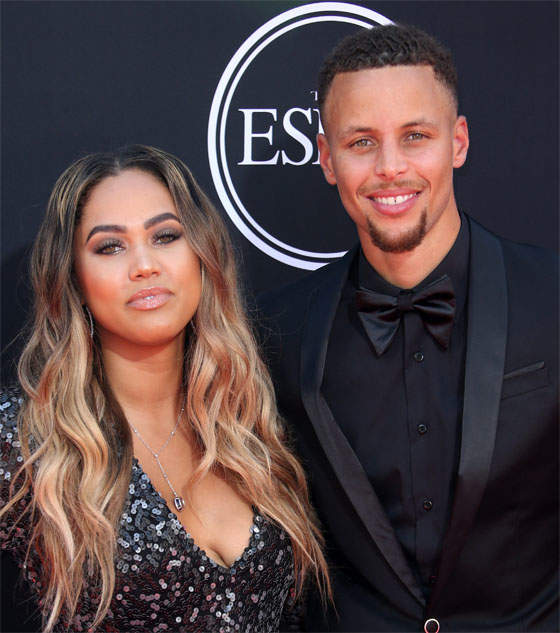 I would imagine it’s difficult being married to a handsome, rich basketball player like Steph Curry yet his wife Ayesha holds her own with a life outside of their marriage as a businesswoman and entrepreneur. Still, when you’re an NBA player two things automatically come with the territory: money and everyone throwing their parts at you. And though many, may players don’t mind dipping their dicks in anything with a pulse, Steph is supposedly a rare unicorn who isn’t into that. Ayesha says she trusts her husband, but isn’t stupid, and is being very vocal about the barrage of booty he encounters on an almost daily basis.

People reports that on the May 6 premiere episode of Facebook Watch’s  Jada Pinkett Smith-hosted series Red Table Talk, Ayesha sits down to discuss her disdain for groupies who are just itching for their opportunity to bounce and dribble on Steph Curry. When Jada asked her panel of guests, including Ayesha’s mother-in-law Sonya Curry, “How do y’all deal with all the ladies around y’all men?” I was surprised Ayesha, who is a chef, didn’t reply with “A hot sauce bottle to the face!” But she said this:

“Stephen is very nice by nature and he’s very talkative. Everything is always very friendly and sometimes to the point where I’m like, I’m a grown woman so I’ll just insert myself. I’ll be like, ‘Hello. How are you doing?’ I’m OK with it now and obviously, you know the devil is a liar.”

“The devil is a liar” must be wife code for “I wish a bitch would” because nothing good comes from anyone who uses that phrase. Ayesha also admitted that she hates the attention he gets from his female fans, but she didn’t say anything about the past cheating rumor about her husband.

If you look at Ayesha while she’s talking you can see just a twinge of crazy bubbling up underneath the surface so Steph probably knows it’s better not to unlock that beast from the cage. Because if he does he may wake up one morning strapped to the bed like James Caan in Misery. And that’s the kind of motivation to make anyone stay on the straight and narrow ’til death do you part.

Check out Ayesha’s snippet below.

Tags: Ayesha Curry, Steph Curry
SHARE
Our commenting rules: Don't be racist or bigoted, or get into long-ass fights, or go way off topic when not in an Open Post. Also, promoting adblockers, your website, or your forum is not allowed. And some comment threads will be pre-moderated, so it may take a second for your comment to show up if it's approved.
src="https://c.statcounter.com/922697/0/f674ac4a/1/"
alt="drupal analytics" >