Open Post: Hosted by Ezra Miller and Keiynan Lonsdale Announcing That The Category Is… CAMP 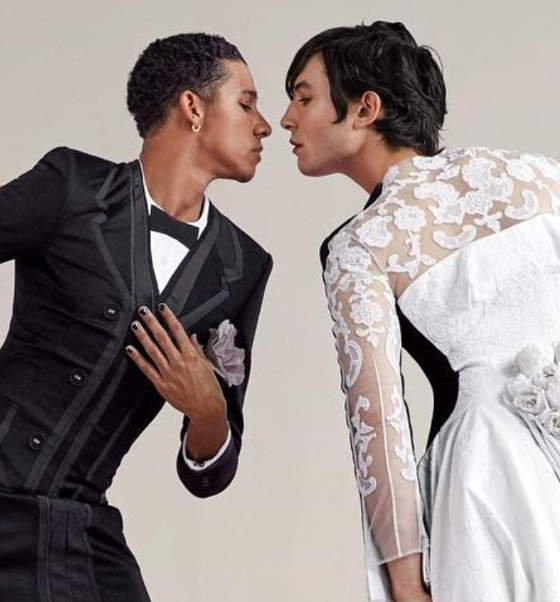 Extra Miller (typo from way back but it stays) is up to high fashion shenanigans again, this time aided and abetted by The Flash’s Keiynan Lonsdale. The pair got all dolled up by Vogue for a Met Ball tease. The Metropolitan Museum of Art’s new spring exhibition, and the theme for the famed ball will be “Camp: Notes on Fashion”. But don’t expect burnt marshmallow nipples or potato sack races down the grand staircase. It’s not that kind of camp. Think John Waters, not Wes Anderson (though I suppose an argument could be made for Wes being campy as hell too).

On Tuesday (April 16), Vogue published a feature on The Met’s new spring exhibit “Camp: Notes on Fashion,” based on Susan Sontag’s seminal 1964 essay “Notes on ‘Camp.’” The exhibit will take a look at camp fashion throughout history in the context of Sontag’s definition of the style, exalting its “love of the unnatural: of artifice and exaggeration.”

There’s something decidedly uncampy about a dry ass, 6,000 word, academic essay about why poorly drawn eyebrows are funny, but who am I do criticize (I mean fuck me. Right, Kit?). To me, it’s more a “you know it when you see it” type situation. And maybe that’s her point. Still not gonna read it, even if it is seminal.

Where do artifice, excess, extravagance, irony, nostalgia, and innocence find common ground? Hamish Bowles traces the thread of camp—from the Sun King to drag queens—in Andrew Bolton’s new exhibition at the @metcostumeinstitute, “Camp: Notes on Fashion,” which is centered around Susan Sontag’s seminal 1964 essay “Notes on ‘Camp.’ ” Tap the link in our bio to read more. Photographed by @EthanJamesGreen, styled by @phyllis_posnick, Vogue, May 2019

??? Thank you @voguemagazine for including me in your 2019 May Issue. I can’t even believe this happened. Thank you with all of my heart ???️‍? x || · Photographer @ethanjamesgreen · Stylist @phyllis_posnick · Entertainment Director @sergiokletnoy · Makeup @hannah_murray1 · Hair @orlandopita · Set Design @frau.juliawagner

Tree’s too pretty in the first one, and the second is too silly to be camp. It’s a tough one though. The white ass Angelina Jolie paper doll legs aren’t camp, but Angelina Jolie, anytime any place, is. I guess we all have our own barometers for camp. And mine is very different from The Met, Vogue or Susan Sontag’s. I look forward to harshly criticizing all the looks at the Met Ball on Monday May, 6th, before thoroughly, and campily, fucking myself.

Tags: Ezra Miller, Keiynan Lonsdale, Open Post
SHARE
Our commenting rules: Don't be racist or bigoted, or get into long-ass fights, or go way off topic when not in an Open Post. Also, promoting adblockers is not allowed. And some comment threads will be pre-moderated, so it may take a second for your comment to show up if it's approved.
src="https://c.statcounter.com/922697/0/f674ac4a/1/"
alt="drupal analytics" >