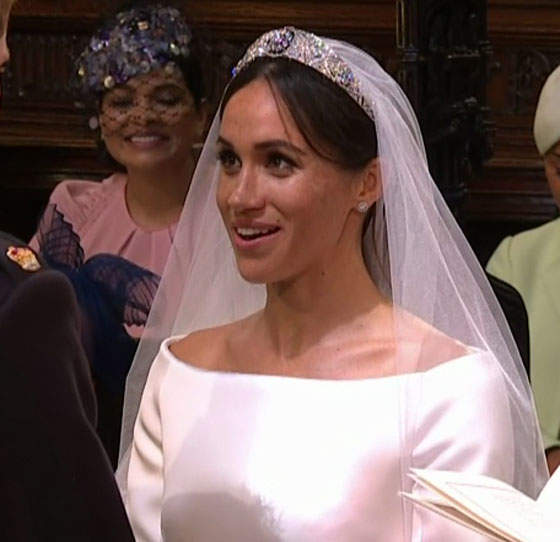 We all remember the dramatic rumor about how Duchess Meghan, who was just Meghan Markle then, threw a fit over not being able to wear the tiara of her choice on her wedding day. Meghan was apparently such a Bridezilla-approved disaster that THE QUEEN had to pull Prince Hot Ginge to the side and let him know to check his bitch. Yes, those were THE QUEEN’s exact words. The Sun claimed today that because of that little incident and how Duchess Meghan has reportedly been treating the staff, THE QUEEN sent her a Zales charge card application since she’d need to buy her own diamonds now that she’s banned from wearing Princess Diana’s pieces from the Royal Collection. But other sources claim that the British tabloids are just being bitchy liars.

The Sun says that THE QUEEN doesn’t like the stories of Meghan being difficult, including a rumor about how she wanted to wear a tiara to her trip to Fiji but Prince Charles told her it would be tacky. So THE QUEEN has punished Meghan by not letting her wear Princess Diana’s pieces from the Royal Collection. On top of that, another source says that Duchess Kate will still be allowed to wear Princess Diana’s pieces because as the wife of the future king of England and mother of another future king of England she’s above Meghan in hierarchy.

“To be perfectly honest, the Queen herself was not impressed with some of Meghan’s demands, especially as a new member of the family. As a result, Buckingham Palace has decided that not all items from the Queen’s royal collection will be opened up to Meghan.

As part of that situation, the Queen informed Prince William that the items from the Royal Collection worn by Princess Diana would not immediately be made available to Meghan.

The Queen likes Meghan personally but this is about the hierarchy. She is showing that maintaining the correct order and precedence within the family is important. Even if Meghan is the most popular woman in the world, she is of a lower rank than Kate.”

But other sources tell People and Vanity Fair a different story.

After Princess Diana’s death, her personal jewels were split among her sons. Meghan has worn several of Diana’s pieces that PHG inherited. People also says that female members of the royal family usually wear jewels from the Royal Collection to state banquets. Meghan hasn’t been to one yet. Duchess Kate wore one of Princess Diana’s favorite tiaras to a banquet in October.

Another source tells Vanity Fair that THE QUEEN would never pull such a move:

“I find it very unlikely. It’s not the kind of thing the Queen would do. She is very generous when it comes to lending jewels to her family.”

Why do I have a feeling that the next time we see Duchess Meghan in public she’s going to be wearing a tiara, earrings, bracelets, necklaces, a titty chain, and a belly ring all from the Royal Collection? But really, why would Meghan even care about that gaudy jewelry when she’s got access to the most priceless and precious royal jewels of all: PHG’s ginger crotch huevos. Not only that, but if I was her, I’d only wear a simple and classic pearl necklace. A simple and classic pearl necklace that would make people near me say, “Why does your pearl necklace smell like jizz and ginger?”

Tags: Duchess Kate, Duchess Meghan, Prince Hot Ginge, Prince William, Princess Diana, The Drama Of It All, THE QUEEN
SHARE
Our commenting rules: Don't be racist or bigoted, or get into long-ass fights, or go way off topic when not in an Open Post. Also, promoting adblockers is not allowed. And some comment threads will be pre-moderated, so it may take a second for your comment to show up if it's approved.
src="https://c.statcounter.com/922697/0/f674ac4a/1/"
alt="drupal analytics" >