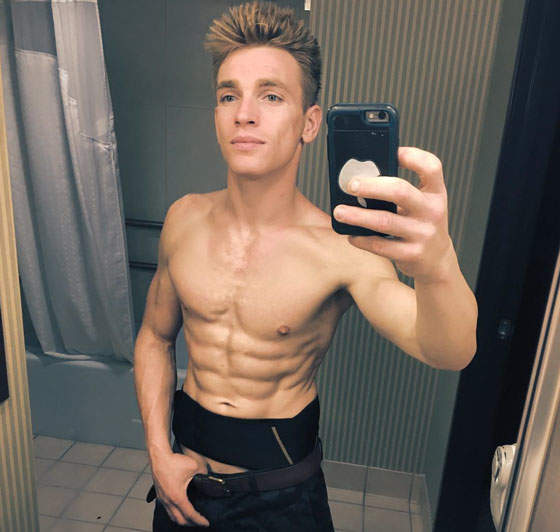 Remember when 76-year-old Calvin Klein decided to finally step out with a rented piece of man meat who was 48 years younger than him? Some army guy turned-model turned-side piece? Well, add another ‘turned’ because he has now turned-alleged-criminal Nick Gruber, one-time slam piece of Calvin, has been charged in Manhattan for beating a man with a frying pan.

The New York Post is reporting that 29-year-old Nick Gruber left court last Friday after dealing with the fallout from an attack, a break-in and drug theft. What had happened was: Nick got arrested on March 11 for something he allegedly did back in September. On September 3rd, it’s alleged that Nick and a co-defendant named Brandon Steele “repeatedly hit an unnamed person with a frying pan.” According to the legal complaint, Nick and Brandon broke several bones in the guy’s back, nearly “severed” his ear, and his vision may be permanently affected. Nick also “refused” to let the victim leave when he was begging to GTFO of there.

Nick got charged with second-degree assault and unlawful imprisonment. But that’s not all.

Nick was charged with more. Prosecutors also accuse him of breaking into an apartment on March 5 in the same building. They say he beat a guy up and held him unlawfully–and stole a bag of methamphetamine and a “newly delivered package of clothing.” So, now that you know he supposedly stole meth, this and that picture make sense, right?

Nick claimed he did not break in because he was subletting from someone. The superintendent was like “Ha, bitch,” and told the police Nick definitely did not live there. He was charged with criminal possession of stolen property, drugs possession and trespassing. He’s out on $5000 bail and due back in court in April.

All in all, Nick could go to prison for up to seven years for the attack and imprisonment, and he can go to jail for another year for the break in and theft.

This is not Nick’s first brush with the law. Back in 2012 he was charged for punching some 20-year-old in the face after a night of partying. Knock a few years of that 20-year-old’s age and Dean Cain would be so proud. He also had cocaine in his pants when he decked the guy.

Nick was going to write a tell-all book about his time with Calvin Klein but then he changed his mind. Maybe he’ll change it back with all these upcoming legal fees he’ll have to deal with. He’ll want some decent legal representation since Nick will not do well in prison. Becoming someone’s bitch in jail is a lot different than Manhattan penthouses and expensive cars; prison sugar daddies gifts are more like: toilet wine and cigarettes.

Tags: Calvin Klein, Nick Gruber
SHARE
Our commenting rules: Don't be racist or bigoted, or post comments like "Who cares?", or have multiple accounts, or repost a comment that was deleted by a mod, or post NSFW pics/videos/GIFs, or go off topic when not in an Open Post, or post paparazzi/event/red carpet pics from photo agencies due to copyright infringement issues. Also, promoting adblockers, your website, or your forum is not allowed. Breaking a rule may result in your Disqus account getting permanently or temporarily banned. New commenters must go through a period of pre-moderation. And some posts may be pre-moderated so it could take a minute for your comment to appear if it's approved. If you have a question or an issue with comments, email: [email protected]
src="https://c.statcounter.com/922697/0/f674ac4a/1/"
alt="drupal analytics" >