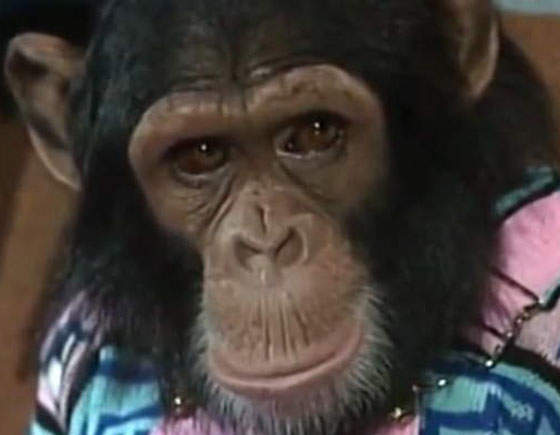 If you thought Michael Jackson’s pet chimp Bubbles was up in heaven sucking on Whitney Houston’s toes and getting psychoanalyzed by Freud to deal with the shit he saw on earth, you’re wrong! Bubbles is alive and well, listening to flute music, playing with his chimp friends and occasionally painting at a Florida sanctuary called The Center for Great Apes. Sounds like heaven on earth, but none of it is thanks to Michael who left Bubbles a penniless pauper when he died. According to The Daily Mail, Bubbles, who is now 34 years old, hasn’t lived with MJ since he was shipped off to live with his trainer in 1988. Bubbles never even lived at Neverland!

The Mail reports that Bubbles was born in 1983 at a Texas bio-medical laboratory and was sold to Michael when he was 8 months old. As a typical millennial, Bubbles spent his youth being handed everything but didn’t have the resources to fend for himself after he left the family home. And Michael, being a typical Boomer, let him struggle.

With Jacko, he always flew first class, went on world tours and made solo appearances on TV chat-shows. Bubbles had his own nanny and slept in pyjamas in a cot beside Jackson’s bed.

Shockingly, the super-rich Jackson never gave the sanctuary’s cash-strapped staff a penny — nor a banana — towards Bubbles’s upkeep, let alone ever visited him.

Admittedly, the late singer’s estate now sends some money every year and his fans post occasional gifts such as blankets emblazoned with Jackson’s face.

After Bubbles reached adolescence, he was sent to live with his trainer Bob Dunn who used to travel with him and teach him tricks like doing the Moonwalk and pretending to not like heavy metal music. But Bubbles didn’t enjoy it and hated crowds. To this day, Bubbles is scared of cameras.

Animal experts were sought for advice and Michael’s sister La Toya said they were ‘highly disturbed’ at the way he was being treated. Bubbles was fortunate. He went to be put in the care of Mr Dunn. And so, by the time Jackson moved to his 2,700-acre Neverland ranch in 1988, Bubbles was no longer living with him.

Bubbles would occasionally be brought to Neverland to “visit” but Michael himself said that he “was no longer part of his life because he had become ‘too aggressive’”. Eventually his trainer made the decision to hand Bubbles over to The Center for Great Apes where he was able to live with other apes. He’s been there since 2005.

Ms Ragan says that, having mixed only with a single male chimp while living with Mr Dunn, Bubbles was very shy at first and was particularly nervous with female chimps.

Bubbles was even eventually allowed to get his freak on for the first time. He was given a vasectomy (as they do for all male apes in their care) and has a number of “females that he likes”. Compare that to Michael trying to find a surgeon who would operate on his vocal cords so he could speak to him.

The last Jackson who visited him was La Toya in 2010 (and that was for TV). Michael left no provisions for Bubbles in his will. Thankfully, Bubbles is finally living his best life, and the center says he could “live for many more years”. The Jackson Estate is so very lucky that Dr. Doolittle surgery Michael tried to get him was a failure. As I said, that chimp has seen. some. shit.

Tags: Animal Stories, Bubbles, Michael Jackson
SHARE
Our commenting rules are pretty simple: Don't be racist or bigoted, or go way off topic when not in an Open Post. If you see an offensive or spammy comment you think should be deleted, flag it for the mods and they'll be forever grateful and give you their first born (although, you probably don't want that).
src="https://c.statcounter.com/922697/0/f674ac4a/1/"
alt="drupal analytics" >