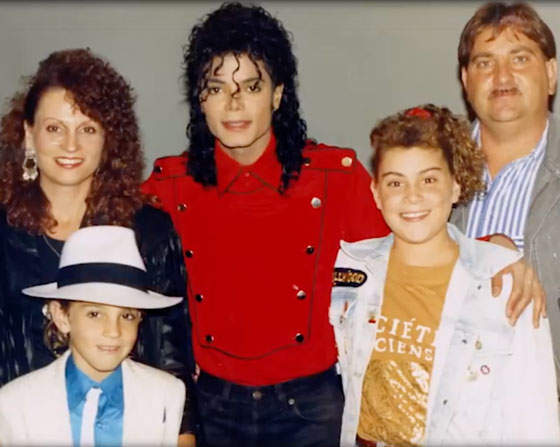 Just when you thought R. Kelly had zapped all the creep factor out of your daily water cooler conversations, the ghost of Michael Jackson had to come back and be all, “Uh…hold my beer.” HBO is coming out with Leaving Neverland, a documentary about Wade Robson and James Safechuck, two kids who frequented MJ’s Neverland ranch and who say the King of Pop sexually abused them. After screening at Sundance (and getting major backlash from Michael’s estate and his fans) and getting early reports that this shit is super creepy, the Leaving Neverland trailer is out.

Entertainment Weekly says the Jackson estate called the two-part documentary, “the kind of tabloid character assassination Michael Jackson endured in life, and now in death.” Basically, Wade and James go into detail of what they say was repeated sexual abuse from Michael. The singer befriended Michael at the age of 7 and Wade, when he was only 10. They (and their family members) talk about how hanging out with Michael was a lot like hanging out with another kid, but then things gets weirder.

Wade alludes to the abuse and says Michael threatened that they would both go to jail for the rest of their lives if anyone ever found out about it. Wade previously testified in 2013 about the abuse, but a judge dismissed the case because the Jackson estate wasn’t liable for what may have transpired. James also tried to issue a complaint that Michael had engaged in sexual abuse of underage boys “hundreds” of times, but a judge also dismissed that case in 2017. HBO still hasn’t released too much about what will take place in the documentary but says it “crafts a portrait of sustained abuse, exploring the complicated feelings that led both men to confront their experiences after both had a young son of their own.” I imagine HBO’s “Please have a bottle of wine nearby while watching this” warning was just implied?

Tags: Michael Jackson
SHARE
Our commenting rules are pretty simple: Don't be racist or bigoted, or go way off topic when not in an Open Post. If you see an offensive or spammy comment you think should be deleted, flag it for the mods and they'll be forever grateful and give you their first born (although, you probably don't want that).
src="https://c.statcounter.com/922697/0/f674ac4a/1/"
alt="drupal analytics" >