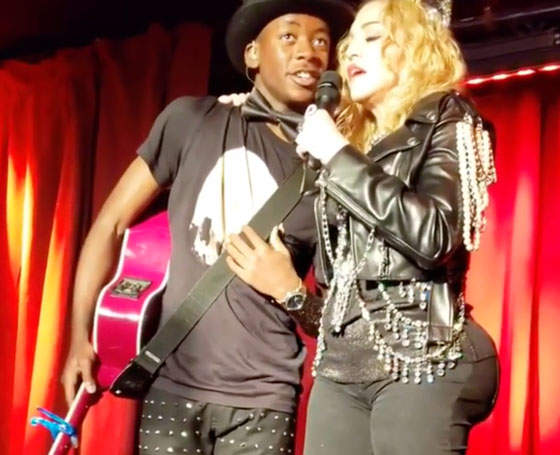 For many years Madonna has been credited as the “mother of reinvention,” which is basically Hollywood-speak for “she don’t miss a gimmick”. One gimmick she should have missed entirely is the current trend of concrete filled gargantuan asses because it ain’t a good look for her. But when has looking ridiculous ever stopped Madge the Vadge from creeping us all out?

On New Year’s Eve in NYC, Madonna performed a surprise set at the legendary Stonewall Inn and she brought a few guests with her. First, her 13-year-old son David Banda performed with her, but the real star of the show was THAT ASS! I’m surprised the cops didn’t raid the Stonewall and arrest Madonna for stealing the ball from the top of Times Square and shoving it into the back of her pants. Yes, that’s just how awful the shit looked. But her set wasn’t all about people’s eyes being glued to the wagon she was dragging into the new year. Variety reports that Madonna, who has always been a huge supporter of LGBTQ rights and will serve as ambassador during Stonewall’s 50th anniversary Pride celebrations, gave a speech about the importance of acceptance and love. And she gave the speech dressed in leather, chains and a silver bow looking like the prototype for a BDSM line of Care Bears.

If THIS is not a HaPpY NeW YeaR I don’t know what the fuck is!!!!! 2019 will be aMazinggg! ?? Thank you @stonewallgives Thank you Madonnaaaaa! ❤️ #Madonna #NoTattooPost #OnlyLove #StonewallInn #BestNewYearsEveEver

“I stand here proudly at the place where pride began, the legendary Stonewall Inn, on the birth of a new year. We come together tonight to celebrate 50 years of revolution.”

She then spoke of the community’s efforts against “hatred, discrimination and most of all indifference. Let’s never forget the Stonewall Riots and those who stood up and said, ‘Enough.’ Half a century later, Stonewall has become a defining moment and a critical point in history.

“If you can’t imagine how happy I am to return home to New York City, where dreams are born and forged out of fire and brought to life, where I am proud to say that my journey as an artist began, and my commitment to equality for all people took root,” she continued.

“If we truly took the time to get to know one another we would find that we all bleed the same color and we all need to love and be loved,” she concluded. “Let’s remember who and what we are fighting for — ourselves, for each other, but truly and most importantly, what are we fighting for?” she asked rhetorically. “Let’s take a minute to reflect on how we can bring more love and peace into 2019, let’s look at how we can bring random acts of kindness. Maybe we can find an opening to bring the light in. Are you ready to do that?”

Madonna performed for a bit as well, including “Like A Prayer” with David Banda on guitar as well as a singalong of Elvis Presley’s “Can’t Help Falling In Love With You” and she may have been serenading the bottles of Fix-A-Flat she shot into her ass or her new ass pads:

#PressPlay: #TSRMommyDuties—#Madonna & her son #Banda on the mic!! Sis been doing her squats!!! ? ?: @micheleruiznyc

I can’t help thinking that ass is gonna land her in a wheelchair for 2019 if she doesn’t cut it out now. But it could be worse. She could have whipped that thing around and started twerking for the fans while David Banda played Juvenile’s “Back That Ass Up” on guitar. Wait, forget I said that. She’ll probably save that performance for New Year’s Eve next year.

Tags: Fake Asses, Madonna, NSFW
SHARE
Our commenting rules: Don't be racist or bigoted, or post comments like "Who cares?", or have multiple accounts, or repost a comment that was deleted by a mod, or post NSFW pics/videos/GIFs, or go off topic when not in an Open Post, or post paparazzi/event/red carpet pics from photo agencies due to copyright infringement issues. Also, promoting adblockers, your website, or your forum is not allowed. Breaking a rule may result in your Disqus account getting permanently or temporarily banned. New commenters must go through a period of pre-moderation. And some posts may be pre-moderated so it could take a minute for your comment to appear if it's approved. If you have a question or an issue with comments, email: [email protected]
src="https://c.statcounter.com/922697/0/f674ac4a/1/"
alt="drupal analytics" >