Queen Of Touring, Iggy Azalea, has run into more issues with her live shows. She finally managed to book one, which is amazing, but the show she did manage to book didn’t go so well after one of her dancers had a seizure onstage. It was a scene.

What happened was, Iggy was performing at the Maracanã Stadium in Rio de Janeiro, where she still has fans who buy tickets to see her rap. During the song “Black Widow” (the irony is not lost from that one), one of Iggy’s dancers hit the floor, not in a dancing way, and started convulsing. Iggy, who is a true performer and artiste and rap-KWEEN, called for a medic up on stage and then kept rapping.

One of @IggyAzalea’s backup dancers passed out during her performance of “Black Widow” at the Maracanã Stadium in Rio de Janeiro, Brazil. pic.twitter.com/n21StFusp3

Okay, do you not live for the part where she is literally hovering over her collapsed dancer and is still vibing to the music and swinging her hair and microphone. This is the imagery I needed to send me into 2019 with positivity and hopefulness.

“Somebody bring a medic up here…. I’m gonna luh lu luh luh luhve you…” And then, Iggy’s dancers all notice the girl is clearly in distress and seem to fully throw up a “Fuck it” by continuing the performance and all descend on their fallen comrade as they’re serenaded by Iggy’s continuing performance. The music was cut and the dancer was whisked away via ambulance and Iggy later continued her set.

Iggy took to Instagram after that scary shit went down to say that her dancer is doing okay, and she thought her dancer had just fallen, and the show must go on, blah blah blah… Basically Iggy IS the Beyonce to her dancer’s Michelle. 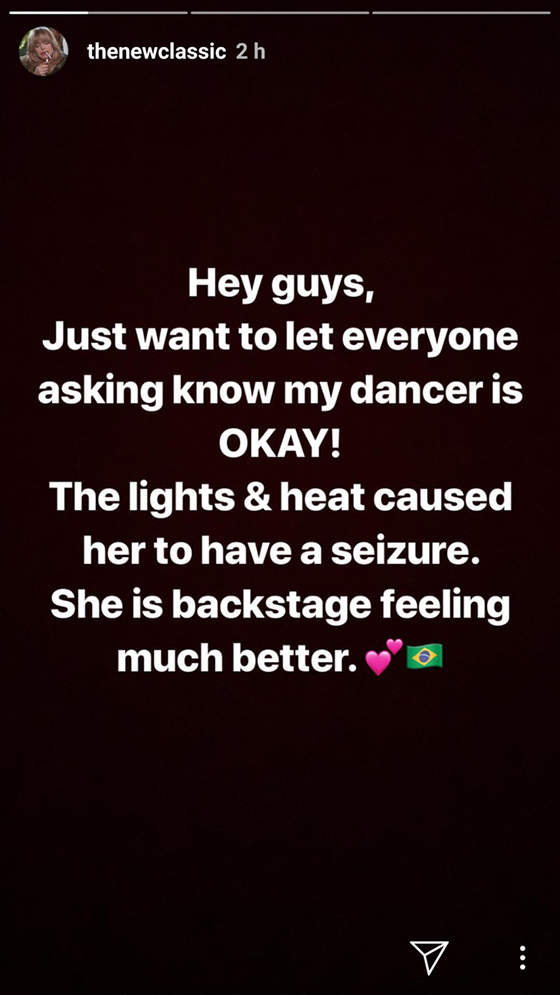 After Iggy got dragged on the internet for not completely stopping the show, she got sad about being the internet’s punching bag. Also another video came out showing that Iggy stopped the show:

So there you have it, Iggy’s dancer is fine, Iggy is not. But people should really lay off Iggy, because if she did completely stop and waited until the medics got to the stage, she would’ve waited all night. Because according to this tweet (also featuring Iggy being greeted at the airport in Brazil by her 3 alleged fans), her postage stamp-sized stage was a million miles away from civilization.

Tags: Iggy Azalea
SHARE
Our commenting rules: Don't be racist or bigoted, or get into long-ass fights, or go way off topic when not in an Open Post. Also, promoting adblockers, your website, or your forum is not allowed. And some comment threads will be pre-moderated, so it may take a second for your comment to show up if it's approved.
src="https://c.statcounter.com/922697/0/f674ac4a/1/"
alt="drupal analytics" >