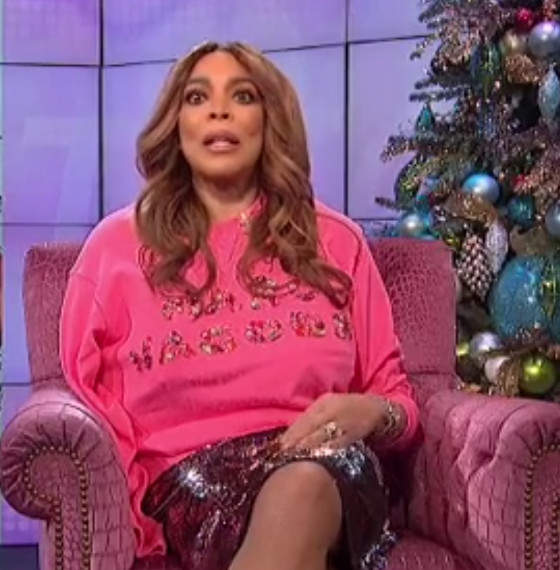 Wendy Williams fractured her arm and cancelled an episode of The Wendy Williams Show at the last minute. Now her friends are worried there’s something more going on with her health than she’s letting on. They say she can barely stand and has “totally checked out”. A source told Radar that Wendy “has been exhibiting strange behavior ‘for weeks’”. Wendy, however, insists that everything’s fine. This is not Wendy’s first health crisis either. Until last year when she had her Halloween, on-air “faintation”, (which she chalked up to menopause), Wendy had never missed a day of work. After that scary (and frankly, iconic) episode, she finally took a 3-week break to take care of her health, and revealed that she was suffering from hyperthyroidism and Graves’ disease.

An insider claims the daytime TV host has something much more serious going on with her health, RadarOnline.com can exclusively report. “Something bad is going on with Wendy,” the insider very close to the 54-year-old star told Radar exclusively, adding that the December 17 episode was cancelled last minute and replaced with a rerun.

Yesterday, Wendy addressed her injury on her show (via Us Weekly):

“I have a hair fracture on my right shoulder, and I did it on Sunday. And by Monday morning, my shoulder was on fire. There’s no way I could have done yesterday’s show, I was all about the medical care yesterday, from one doctor to the other. I’m on the mend, I don’t need an operation. They tell me I’m very healthy for, um … a person after 50. I don’t need an operation, and I’m not wearing a hard cast. But I do have a sling. … Staff, crew, the show will go on!”

Here’s a clip from that show. It looks like Wendy decided to wear her sling on the inside of her clothes, making her look kind of like a Bratz doll with one arm pulled off.

RHONJ’s Danielle Staub might have found a new man: Al B. Sure! The OG housewife and R&B singer were spotted making out at a bar in Harlem. Watch Hot Topics now at wendyshow.com/hot-topics

A few days before her injury, Wendy was equally cagey about why she’s been sitting a lot more frequently during segments she used to do standing. She addressed it on camera (via Radar).

“So it has come to my attention…that you all are noticing that I sit, a lot. I love to have several seats. I don’t just sit here, I’ve been sitting in the audience, I sit to do demo projects as well. You know why? Cause I want to!” she told the audience. “Cause this is my show, and this is how I want to do it. I bust my ass on this show, every single day.”

For somebody who loves tea as much as she does, she’s being awfully stingy pouring it in her own house. I can’t help but think about how she insisted backwards, sideways, and forwards that her shifty husband Kevin Hunter was faithful to her despite an abundance of evidence to the contrary. Wendy is stubborn as a mule. And I hope she won’t let that come between her and her good health. We need you and the messy tea, Wendy.

Tags: Health Scare, Wendy Williams
SHARE
Our commenting rules: Don't be racist or bigoted, or get into long-ass fights, or go way off topic when not in an Open Post. Also, promoting adblockers, your website, or your forum is not allowed. And some comment threads will be pre-moderated, so it may take a second for your comment to show up if it's approved.
src="https://c.statcounter.com/922697/0/f674ac4a/1/"
alt="drupal analytics" >