Post Malone Designed A Pair Of Crocs, And They’re Already Sold Out Crocs, America’s unofficial shoe of screaming theme park moms and kids with permanent fruit punch mouth. They don’t need celebrity endorsements, because they really sell themselves. What are you going to wear when you’re screaming at your kid that they’ve had enough red juice? But they continue to pay famous people, possibly in hopes that someone will make Crocs seem cool. As it turns out, Crocs found that person in a human that looks a tattooed Fozzie Bear, and he’s done a good job of selling them.

Yesterday, Crocs dropped their collaboration with rapper Post Malone, a shoe called the Dimitri Clog. Sadly, anyone hoping to buy a pair is going to have to fight it out with other Post fans on eBay, because they sold out almost immediately.

my first collab with @crocs is SOLD OUT already! go to link in my bio to get updates on future releases. ? by @adamdegross

Crocs confirmed the shoes sold out, but adds that they’ll be releasing more next month. Good news for fans of bad taste! 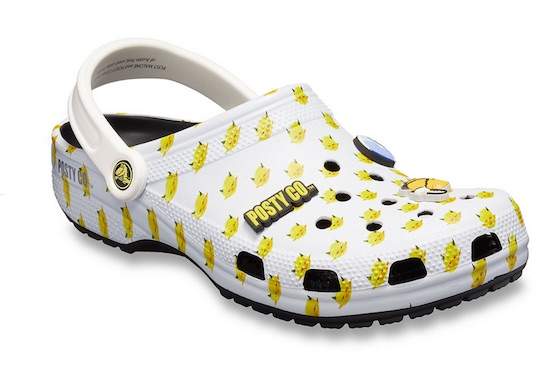 That’s like the footwear version of what you’d look like after you did a ton of drugs and made some poor decisions at a Post Malone show. A deal with Crocs might actually be the perfect brand pairing for Post Malone. Post always looks like he’s too busy for a shower, and what’s easier than a shoe you can wear while your manager turns on a hose and yells “Quick, someone grab the soap!”

There were many disappointed Post fans yesterday who missed out. One such bummed out fan was Madonna. After Post announced his shoes sold out, Madonna left a comment on his Instagram asking: “Omg I love those. How can I get some??” Crocs replied to her with: “QUEEN, hi! DM us!” Of course the coolest mom of the Cool Moms would have to have a pair of Post Malone Crocs. I hope everyone understands what they’re getting themselves into. Madonna’s definitely going to thank Crocs and Post Malone for hooking her up by Instagramming a picture of those shoes balancing on her bare ass.

Tags: CROCS Are Evil, Disgusting, Madonna, Post Malone
SHARE
Our commenting rules are pretty simple: Don't be racist or bigoted, or go way off topic when not in an Open Post. If you see an offensive or spammy comment you think should be deleted, flag it for the mods and they'll be forever grateful and give you their first born (although, you probably don't want that).
src="https://c.statcounter.com/922697/0/f674ac4a/1/"
alt="drupal analytics" >